Hundreds of Thousands Take Over Streets as Lebanon's Protests Grow 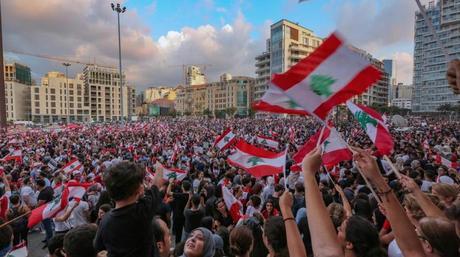 Hundreds of thousands of protesters took to the streets for a fourth day Sunday across Lebanon despite rain in some regions, as key roads around the country remained blocked, in what has become Lebanon's biggest cross-confessional protest movement in modern history.

The capital Beirut, second city Tripoli in the north and the southern port of Tyre came to a standstill, with streets filled with protesters waving the national flag, chanting "revolution" or "the people demand the fall of the regime" -- a common refrain of demonstrations in other parts of the Arab world.

Protests have grown steadily across the small country since public anger first spilled onto the streets Thursday evening in response to a proposed tax on calls via WhatsApp and other messaging services.

While the government quickly dropped the plan, the leaderless protests morphed into demands for a sweeping overhaul of the political system, with grievances ranging from austerity measures to poor infrastructure.

"I am demonstrating here to bring down the president's men and his corrupt government," Sanaa Mallah, 40, said in downtown Beirut. "I have a lot of hope in this movement."

Road-blocking protests meanwhile continued across the country and in areas near the capital such as Dora, Jisr al-Wati, Sin el-Fil, Nahr el-Mot and Jal el-Dib.

Central demonstrations were also underway in major cities such as Tripoli and Tyre.

In Beirut, protesters on Sunday called out the names of specific politicians from across the country's sectarian system, with the crowd responding with swear words.

What some have dubbed the "WhatsApp revolution" has support from wide swathes of Lebanese society.

The protests have been largely good-natured, with people singing or launching into traditional dabke dances on Saturday, while others played cards and smoked shisha into the early hours.

In Tripoli, Lebanon's traditionally conservative second city, the protests at points looked like a music festival overnight Saturday, with a DJ pumping out dance music from loudspeakers.

On Sunday, Nazih Siraj, 50, said he lost his job after the government removed stalls from the roads.

"I can't afford to rent out a place because of the high prices and unfair taxes," he told AFP, saying he was demonstrating for the future of his four daughters.

"Its time for a change. There is no going back from the streets after today."

Zalfa Aboukais, 27, was hanging signs bearing the names of lawmakers and ministers on barbed wire near parliament and the seat of government, saying they were all "thieves".

Originally from south Lebanon, she said she was protesting "against the hooligans who have been in power for 30 years."

Dani Mourtada said the country was waking up to reject entrenched sectarian divisions.

"We no longer want people to beg for legitimate rights and services that the state is supposed to provide," the 26-year-old protester said.

The protests have been marked by their diversity, drawing wide swathes of Lebanese society largely united on what they oppose -- with many condemning the entire political class as thieves and criminals.

Demonstrators in Beirut celebrated the news of the coalition party's resignation, calling on other blocs to leave the government. In Tripoli, they let off fireworks.

He held a series of meetings Saturday regarding the situation.

More than a quarter of the Lebanese population lives below the poverty line, according to the World Bank.

Growth has plummeted in recent years, with political deadlock compounded by the impact of eight years of war in neighboring Syria.