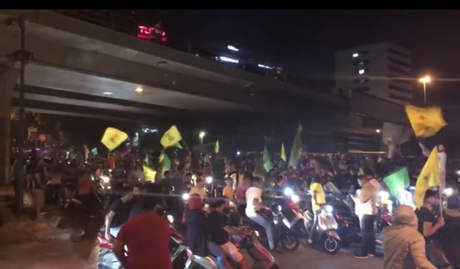 Supporters of Hizbullah and the AMAL Movement roamed some of Beirut’s streets on motorcycles on Monday evening, carrying flags of the two parties and shouting insults against what they called “the revolution.”

Media reports said the army prevented the convoy from entering the protests area in downtown Beirut and that the motorcycles “returned to Beirut’s southern suburbs” after roaming the capital’s streets.

“During the phone call, he (Hariri) stressed the need to protect the protesters and not to allow harm against any of them, while emphasizing the need to reopen roads to facilitate citizens’ freedom of movement in all regions” as well as the transfer of essential goods and medical crews.

Berri claims to carry the mantle of Imam Saddr. He is an imposter and corrupt to the bones. If Emam Saddr was still alive, he would be the prime supporter of the demonstrators and Iran’s 2010 Green Revolution was was brutally suppressed by the Basij. The criminal Iranian regime is only remaining in power by crushing the 2010 Green Revolution uprising by educated and productive sector of the Iranian society. Iranian of the Green Revolution were demanding the same democracy and rights Lebanese Shia enjoy but were brutally suppressed by the Basij. Berri and Nassrallah supported the Basij but Green Revolution II will topple them and restore freedom, democracy, prosperity and intellectual vitality to the Shia community.

As to Hizbollah so called massive support among the Shia, well history teach us it is the same 99% support based on terror and indoctrination that Saddam and Kaddafi enjoyed just before their fall! Hizbollah only survives by keeping its community poor and uneducated to avoid a Lebanese Green Revolution. 2005 was the Cedar Revolution to kick the Assad occupying forces. 2019 should be the Lebanese Green Revolution to kick out the Iranian/Hizb occupation.

Since 2005, Lebanon should have been the Singapore of the ME & Dubai of international business and regional headquarter of foreign corporations due to its human resources, education system, democratic system, plurality, entrepreneurial spirit, climate, sophistication and worldwide connections. The reason we are bankrupt, gradually loosing freedom, democracy and independence has one source: Hizbollah and those supporting it notably Bassil party. The economic cost of Hizbollah is in the hundreds of billions by causing the exodus of international corporations, making long term investment impossible, threatening our Gulf neighbors and behaving as the attack dog for Iran’s expansionist policies ready to sacrifice Lebanon at any moment as in 2006. It enslaved the Shia community in a radical culture foreign to Lebanon. Only one possible solution: Hizbollah or Federalism to safeguard future generation from this foreign agent.

They tried to get downtown via Mono, that's a nono

It shows for now the army is protecting the people and not defending these thugs. I think theses guys thought they could sail through because of their flags, and thankfully, they got what they deserved because of them.

Of course Amal and hizbollah media will disassociate itself from what they got exposed to on camera. Where did these flags come from? Siri linka or dahyeh?