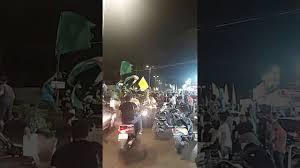 The Lebanese Army cracked down on Hizbullah and AMAL Movement supporters on motorbikes as they aggressively roamed some streets in Beirut carrying the parties’ flags and shouting insults against what they called “the revolution.”

The motorbikes on Monday evening tried to terrorize and provoke the protesters in downtown Beirut and infiltrate their ranks but the army prevented them.

Protesters meanwhile vowed to resist any attempt to scare them from peaceful protests by anybody.

The army upped security measures on all the roads leading to Beirut’s Riad al-Solh Square where protest movements are swelling seeking the removal of the entire political class.

The motorbikes have reportedly “returned to Beirut’s southern suburbs” after roaming the capital’s streets.

armed minority ruling the majority..those are the ones who are terrorizing the country..next they will shoot at the army officers same as in ghaziye..

Let them try to pass through Achrafieh again... I talked to people who told me that a welcome committee will be waiting next time....

This is the root of our economic problems, crushing debts, world isolation, lack of freedom and independence. For how long must all of Lebanon pay the price!