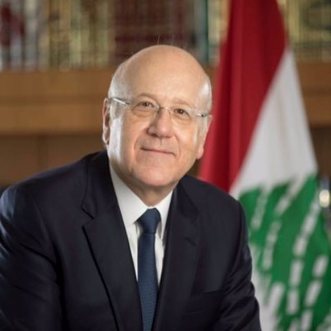 NNA said Mikati and others are charged for obtaining housing loans subsidized by the Central Bank of Lebanon.

The Judge referred them before the first investigative judge, NNA added.

Miqati later held a press conference in which he voiced surprise over the "timing" of Judge Ghada Aoun's decision to prosecute him, describing it as a political "message" from the presidency.

Miqati added that he is "at the disposal of the judiciary," saying that he will not "hide behind" his parliamentary immunity and that he is ready to lift bank secrecy off his accounts.

He said the charges were punishment for not supporting the election of President Michel Aoun in 2016 and for calling on the government to resign in the face of mass protests that broke out last week.

Bank Audi, which was accused of cooperating with Miqati, also emphatically denied the allegations in a statement, denying "any activity related to illicit enrichment."

According to reports, Miqati, the founder of holding company Miqati Group, was accused of eating up a big chunk of subsidized financing to purchase homes.

The former prime minister, who resigned from the post in 2013, has previously denied the allegations.

He announced he will give a press conference on Wednesday to address the charges.

Corruption is rife in Lebanon, but it is rare for politicians to face legal proceedings.

The telecoms mogul, in tandem with his brother Taha, has multiple business interests in West Africa and across the globe.

Miqati's estimated wealth is $2.5 billion, making him among the 1,000 richest people in the world.

More than 25 percent of Lebanon's population lives in poverty, according to the World Bank.

In 2018, Lebanese media reported that Miqati and the others were accused of wrongly receiving millions of dollars in subsidized housing loans.

The loans were supposed to help low- and middle-income Lebanese buy homes. The government-backed scheme has subsequently stopped granting any new loans.

At the time, the Miqatis dismissed the accusations.

Hundreds of thousands of Lebanese have poured onto the streets daily since last Thursday in an unprecedented outburst of anger against a political class widely seen as corrupt.

Some demonstrators have raised signs calling for the housing loan program to be revived.

In this 'strong' tenure, the only corrupt politicians are going to be sunnis.

99% of our economic problems are due to Hizbollah arms, creating a state within a state, controlling decisions of war and piece, creating the exodus of all good paying western multinationals that used to have Beirut as its headquarter, and creating financial uncertainty that scares away all productive initiatives and long term investments. If Hizb arms and control of Lebanon's government is not addressed, we are heading to a much worse condition. I am shocked this is not the prime demand of educated protectors. We can't be that blind and stupid!

He is probably a scapegoat, but guilty to some degree. I can't imagine a politician not guilty of some kind of crime since they have immunity and are given a green light by the current self serving laws.

I will say this though--timing seems a bit suspect.

Of course, it is, in case of Hariri signs out (resigns) it will cut short Miqati's ambitions to lead an intermediate government.

I dont know if the case is about this but he took 14 millions USD loan from Al Iskan and with only 1% interest.

So you want to punish the thieves and shout kelloun ya3ne kelloun, then when they start with someone, u object ?