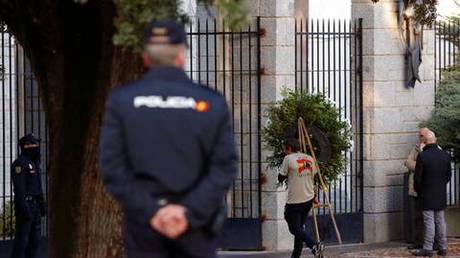 Two members of a Lebanese family suspected of trafficking Syrians on flights to Germany and the Netherlands were arrested in a series of raids in Germany on Thursday, authorities said.

Police said that 29 properties in four German states were raided as part of an investigation launched at the end of last year. Most were in Rhineland-Palatinate, in the southwest, and in North Rhine-Westphalia, its northern neighbor and Germany's most populous state.

The Syrians, who had paid "large sums of money," were flown largely from Beirut to Frankfurt, Duesseldorf, Munich and Amsterdam, using forged visas to get through passport checks in the Lebanese capital, prosecutor Peter Fritzen said. They applied for asylum on arrival.

Investigators are looking into 26 attempts at trafficking people, 10 of which were prevented when authorities intercepted the forged visas and people were turned back in Beirut.

The suspects arrested Thursday were two members of a Lebanese family that has lived for years in the German town of Bitburg. Authorities were trying to track down two other suspects, and were also investigating other alleged offenses including theft.