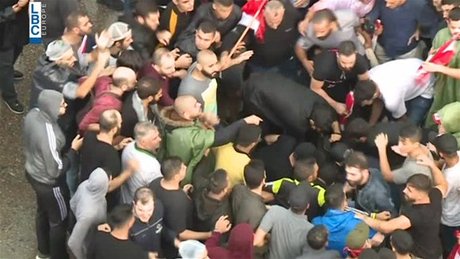 The scuffles had first erupted Wednesday evening but took a more violent turn on Thursday with the increase in the numbers of both the protesters and the "Nasrallah defenders."

Riot police intervened twice on Thursday and separated between the two groups. Al-Jadeed TV meanwhile said an army force had also arrived on the scene.

Several people were injured according to TV networks.

The pro-Nasrallah group tried to remove tents erected by the protesters during the scuffles.

nice 'resistance' nasralla---I am sure you are proud of what is 'protecting' Lebanon. Thugs and bullies--no more.

How long must we wait until people wake up and realize Nassrallah and Hizbolah are the root of our problems? What respectable country in the world allows a militia funded, trained and indoctrinated by a belligerent radical country to have more arms that its army!!!! By any definition it is a foreign agent and anyone working with it is plotting against our Country and culprit of treason. Yes, all corrupt zoomas from all parties should be tried, but let us not loose the compass and this unique opportunity to restore independence and sovereignty!

Hold your horses, you have problems in your own neighbourhoods too.

So do YOU and by far!
and by God your in the minority ;)

All of them means all of them... tell your Hizb Ebola to stay out of Lebanese peoples lives....

Israel loves chaos, and these protests benefits Israel only. Israel thrives with lust when Lebanon is in chaos, just like they were happy when Syria burned into hell.

I agree with some of these protests, I can understand peoples frustration, but some people like you try to politicize these protests to attack other peoples sects, and this is not even what the protesters want, they want to abolish the secterian system in Lebanon, and yet you are here to talk about Shia and what not, you are not one of the good protesters that just it better for Lebanon, you want what is best for Israel you saudi lackey.

these young protesters believes they can make good changes in Lebanon, even though chances are slim, you want what is best for your Israeli masters to see Lebanon in tire flames and chaos.