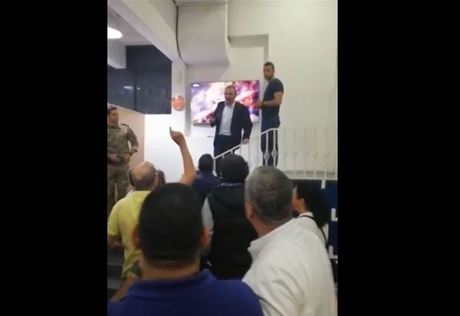 Free Patriotic Movement chief and Foreign Minister Jebran Bassil on Thursday told party members not to be scared of the ongoing popular revolt in the country.

“The most important thing is: do not fear and do not shake. This Movement does not fear and does not shake,” Bassil told FPMers inside the movement’s headquarters in Sin el-Fil as they came up with their own “Hela, Hela, Ho” pro-Bassil chant in response to the popular slogan used by protesters on the streets – and in some instances inside cafes and supermarkets.

Literally translated, the last two words of the slogan seek to insult a person through cursing their mother, but in Lebanon it basically means “f*** you”.

Bassil asked supporters not to care about minor “details.”

“What’s important is that we are strong and prudent,” he added.

If I WERE Bassil. Not was. Improbable conditional is past tense.

I have the utmost respect and deepest admiration for Mrs. Lebanon_First for being grammatically correct.

Really there are still people that support this guy or any other politician. Let's hope they wake up soon... WOW...