Hariri 'Relieved' after Resignation as Mufti Calls It a 'Positive Shock' 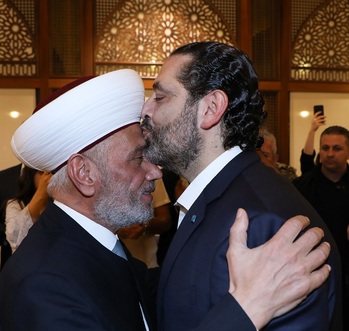 As soon as Prime Minister Saad Hariri announced his resignation, popular delegations, dignitaries, clerics, former prime ministers, incumbent ministers and al-Mustaqbal Movement MPs from different areas flocked to the Center House to express their support for his decision to resign.

Hariri told his visitors: “I just want to say: May God protect Lebanon and we hope to get out of this impasse and we hope that the country will be fine.”

He said he was relieved because the resignation was in response to what the people wants, and said: “We will all stay together.”

Mufti Daryan expressed his solidarity with Hariri’s stance. He said: “Premier Hariri’s resignation puts all officials before their historical and national responsibilities to preserve Lebanon’s stability and security, the dignity of the Lebanese people and their decent living.”

He added: “The resignation of Prime Minister Hariri represents a positive shock to all the officials and the Lebanese to agree on solutions that take the country out of the deadlocks and crises from which the Lebanese suffer.”

This photo is a perfect illustration of the problem. Clerics and politics cannot and should not ever mix!

I want to zip the grand mufti’s lips as well as Rahi’s and the other Iranian ayatollah waffler.

Just like the deserter Michel Aoun owns Rahi and Berri and the other terrorist owning Qabalan and they are all billionaires with stolen Lebanese republic money.