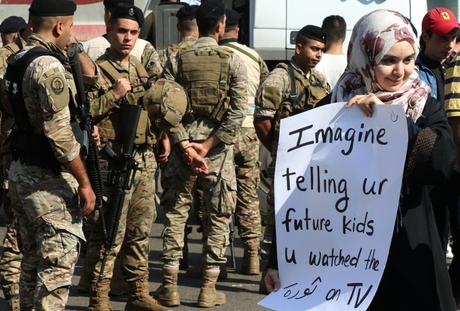 For 32-year-old Uhood from Beirut's Tariq al-Jedideh district, corruption in Lebanon's leadership is the reason she has to shower at a friend's house when water pipes run dry at home.

It's also why she has to pay what she calls a "mafia" of private electricity providers to cover for poor state supplies.

"Access to water and electricity are the most basic of rights, but ever since childhood we've become used to frequent cuts," she said.

"We are sick of the lies and of the corruption. We don't trust political leaders anymore," Uhood yelled, as riot police streamed into a Beirut thoroughfare to contain violence as rioters attacked demonstrators.

An unprecedented protest movement has gripped Lebanon since October 17, demanding an overhaul of a political class that has remained largely unchanged since the end of the 1975-1990 civil war.

A long list of grievances have spurred exasperated Lebanese to protest, but poor public services are among the key complaints.

They symbolize to the Lebanese people the profound challenges of governance and accountability in a country ranked 138 out of 180 in Transparency International's 2018 corruption index.

Many say they are fed up with paying the state for intermittent tap water they describe as undrinkable.

Most also pay for drinking water and private tankers to deliver water when pipes run dry.

The vast majority of Lebanese also pay two bills for their power -- the first to an ailing state electricity company, and the second to expensive private generators for the three to 12 hours each day when mains supply cuts out.

"There is a lot of corruption," said Hussein Ghandour, his voice muffled by the sound of heavy roadblocks being moved to allow ambulances and security forces to pass.

"Politicians steal public funds meant for water and electricity projects... this is why these projects are not being implemented," said the 24-year-old.

According to consultancy firm McKinsey, Lebanon has the world's fourth worst electrical supply, ranked only above Haiti, Nigeria and Yemen.

Reforms to the electricity sector have not been implemented for the past three decades since the civil war.

A new electricity plan promising uninterrupted supply was approved by the government in April, but has yet to be implemented.

The national utility receives one of the largest slices of the government's budget after debt servicing and salaries.

According to the World Bank, "sector subsidies averaged 3.8 percent of GDP during 2008-2017, aggregating over the years to account for close to half of Lebanon's overall external debt."

Last month, an economic rescue plan issued by the government in response to street pressure said permits would be granted within four months for the construction of power plants to tackle chronic blackouts.

But demonstrators have little faith in a government they say has botched several attempts to improve a grid notorious for blackouts.

"We gave political leaders a lot of chances to provide us with 24/7 electricity supply," said Alaa, sitting on a chair placed on the middle of a congested road.

"Now it's too late," the 24-year-old added, waving angry motorists away from a tunnel blocked by demonstrators some 10 meters (yards) ahead.

Following the government's resignation last month in response to street pressure, plans to boost power supply within the coming months and hike the electricity tariff, are now harder to realize, according to Jessica Obeid, an energy expert.

The government could take a series of measures to provide electricity 24 hours a day within the second half of 2020 but it would have to "compromise sustainability, good governance and cost-effectiveness," she added.

A more sustainable and cost-effective solution, would require the government to implement an already approved project to shift from relying on diesel and fuel oil to natural gas.

It would also need to cut down drastically on technical and non-technical losses, and focus on engaging citizens which will take some time, said Obeid.

"The next government may try to look for a quick fix, but that will open up a whole new set of challenges," she told AFP.

"According to consultancy firm McKinsey, Lebanon has the world's fourth worst electrical supply."

what does Basil have to say about that?