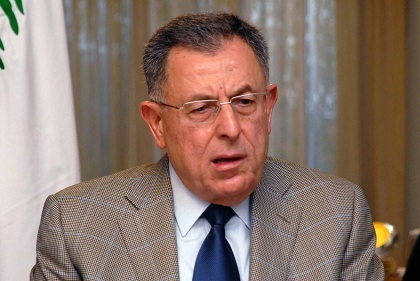 Former premier Fouad Saniora on Thursday gave a three-hour testimony before Financial Prosecutor Ali Ibrahim in the case of “the $11 billion spent between 2006 and 2008,” the National News Agency said.

The hearing session was held in the presence of Saniora’s lawyer – ex-minister Rashid Derbas.

In remarks to Asharq al-Awsat newspaper, Saniora had said that he would not attend the session.

“”I am a man under the law, I fully trust what I have done for the interest of Lebanon and the Lebanese, I would have done the same today if I were the prime minister,” added Saniora.

On Wednesday, the financial prosecutor had asked Saniora to “show up at his office at the Justice Palace on Thursday morning,” the National News Agency reported.

But State Prosecutor Ghassan Ouweidat later told NNA that "due to the failure to inform ex-PM Fouad Saniora of the date of the hearing session... it has been decided to reschedule the session to Thursday, November 14."

Earlier this year, Hizbullah MP Hassan Fadlallah called for a probe into what he claimed were missing state funds amounting to $11 billion dollars.

He was indirectly pointing a finger at former PM Saniora.

He submitted financial documents to the judiciary that he claimed could “land many people in jail, including former prime ministers.”

Saniora later described the issue of the “missing” $11 billion as a “farce,” as he announced that those “setting up mini-states inside the state” are the real corrupts, in an apparent jab at Hizbullah.

Saniora said the 11 billion dollars in question were spent on interest hikes, treasury loans for Electricite Du Liban, and wage hikes and recruitment expenses for the armed forces.

because it is politically motivated.

How serious and trustworthy can a magistrate be when he comes up with 1 new file per day?
These files were stashed away... they reek of vendetta and notice how no Amal/Hizbala/FPM crooks are being targeted. It’s quite disturbing.

We need neutral magistrates and judges and this won’t happen in Lebanon.

What $11BB lol?? I was not there, I dont recall, I was on vacation, it was everyone else but me....I refuse to answer as its religiously driven, politically driven.... all sorts of finger pointing and no real results that would put some money back into the loan.

Let's put things in perspective here. I am no fan of his but people need to understand what's going on here. The man had to keep the country going and meeting the state's obligations towards creditors and employees in the absence of a parliament that was blocked by hezbollah and aoun for 2 years. Hence, there were no budgets and the expenditures were incurred based on the accrual principal of accounting. He is no angel but to claim he stole $11 billion is ludicrous.

You do know he's been investigated the early 2000. Tell me how would YOU feel if for 20 years they've been dragging you to one interrogation after another and to date they haven't been able to find anything.

The Sanioura's have always been living comfortably.... long before foufou entered politics.
But then, a few years back "he" (a broker sent by him) made an offer of 12 million dollars for a family property that belongs to my dad and his siblings... this is quite a consequent amount. I can't stand the guy's personality, he isn't transparent but there's one sure thing, he isn't the biggest thief in Lebanon. Bassil, Berri, Jumblatt and many others are worth thousands of Saniouras.

Is your nasrallah one of them too?