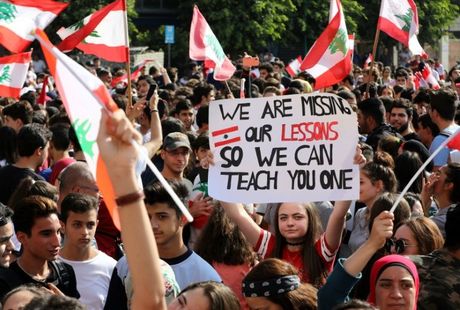 Hundreds of students in the southern city of Tyre joined for the first time on Saturday the masses of fellow students in different parts of Lebanon boosting the country’s anti-government protest movement.

Since Wednesday, university and high school students across the country have massively deserted their classrooms to join nationwide streets protests.

Thousands of high school students across Lebanon skipped classes Saturday for a fourth day in a row to carry on the flame of the country's anti-graft movement.

Lebanon has since October 17 been gripped by massive cross-sectarian protests demanding a complete revamping of a political system they say is corrupt and inept.

With youth unemployment running at over 30 percent, school students have joined en masse since Wednesday demanding a better country so they don't have to emigrate.