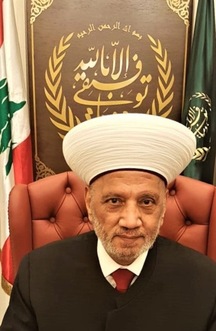 Grand Mufti of the Republic Sheikh Abdullatif Deryan on Saturday urged the political authority in Lebanon to listen to the “people's demands,” amid nationwide protests against the political class.

"It is time to respond to people's demands and to their free national will... It is time for the people to regain their confidence in the State and its administrative institutions ... It is time to respect the principles of democracy," Deryan said in a message marking the Prophet Mohammed's birthday.

He also called on officials to form a rescue government without delay.

"I call on those responsible, to form a government of competent specialists and immediately begin the implementation of the reform paper prepared by (caretaker) Prime Minister Hariri, to address the country's problems," he maintained.

Finally, Deryan urged the political class to "rise above their personal interests and narrow calculations for the sake of the country and its people."

Deryan: It’s Time to Respond to People’s Demands
We all agree. So, it is time for you to go live in Mecca, the Patriarch in the Vatican, and Qabalan to Iran.

Yes, the return of meca refugies...

Daryan stop meddling with politics. Islam and real Muslims don't have a religious hierarchy so from one Muslim to another, I ask you to zip it. The people demand the end of political sectarianism and you must heed to the people's demand by remaining quiet.