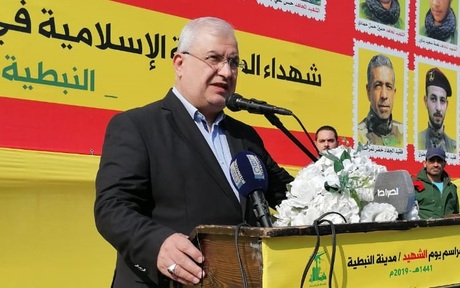 The head of Hizbullah’s parliamentary bloc MP Mohammed Raad on Sunday stressed that his party “cannot be strong-armed” and that “fabricated battles” linked to the ongoing popular uprising in the country will not deviate Hizbullah’s attention from its main objectives.

“We cannot be strong-armed and neither partial concerns nor fabricated battles imposed by others every now and then can derail us from the course of fulfilling martyrs’ goals,” Raad said at a ceremony marking Hizbullah’s ‘Martyr Day’ in Nabatiyeh.

“Martyrs are the ones who created the sovereign atmosphere in which every change or reform seeker and every anti-corruption protester can be active,” Raad added.

“We share the goal of combating corruption, lifting immunity off corrupts and recovering stolen funds… with all the honest people who rose up and took to the streets… but we want others to respect our experience and realize that their movement is within the atmosphere provided to them by our martyrs, mujahideen and heroes,” Raad went on to say.

The Hizbullah lawmaker also warned the protest movement against “launching arbitrary accusations” or “hurling insults against icons, especially those related to the leadership of the purest, most honorable and noblest people.”

“We want to combat corruption, we respect others’ experience and we are keen on the success of their experience, and we warn them that someone might infiltrate their movement to take them into a course that would plunge the country into the wishes of the enemies,” Raad added.

The Hizbullah lawmaker also warned the protest movement against “launching arbitrary accusations” or “hurling insults against icons, especially those related to the leadership of the purest, most honorable and noblest people.”

That is just your opinion--but it shouldn't matter because you are officially a terrorist.

Officially to whom? Israel and America.
You are not welcome in Lebanon

"You are not welcome in Lebanon"

lol yeah coz you own Lebanon. Go to Iran ya terrorist.

Yeah Lebanon is not for Israelis, they are the enemies of Lebanon and you whom say they should be in Lebanon are zionists and will be trialed sometime in the future inshallah.

Who finance Lebanese Forces, Your protests, Mostaqbal, Kataeb and all the other losers?

America and their lobby jews, Saudi, France and Britain.
You are hypocrits.

atleast we admit who finance us.

How’s Dearborn nowadays ...Mystick? Are you getting snow yet ? LoL at your hypocrisy...

Your obsession with Israel is pathetic.
We don,t give a shit about Israel.
A bunch of farms you are not capable of liberating do not justify all this paranoia. You are scared shitless of the zionist, while we don't care...

You are the ones who ALWAYS bring up the Saudis, the Americans, the Zionists, just to make up for being Iran's lap dog! Tfeh! Pathetic creatures!

America's sanctions bled all of Lebanon. But nobody of you western Arab boys talk about that.

America bled All of Lebanon, it is true... because of your sectrerian disgusting militia!!

Everyone in Lebanon grew up with a secterian mind you are a liar if you say otherwise, I never saw you step in when people smear a whole religion the Shia forexample, so ofcourse I will be doubtful of your so called "noble" fight, secterianism it is in the blood of any Lebanese person, you can talk all you want about new blood and associations, infront of cameras they claim not to be secterians, but on the streets they whipser other things.

So you admit yourself that America bled all of the Lebanese no matter what sect, just to hurt Hezbollah.

That should say alot about your American Trump lovers, but ofcourse you will still bow down to America like a good lapdog.

I know the Shia are without a doubt beautiful people. I know this first hand

Did your neighbors die with a smile of their faces?