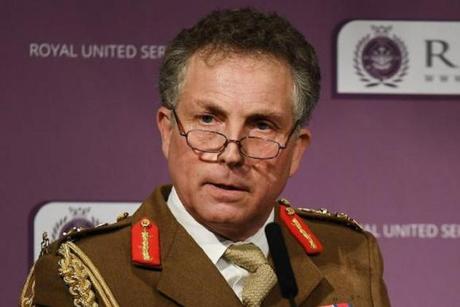 He pointed to covert operations by the Wagner Group -- a private army the Kremlin denies funding -- in Syria and Africa as well as disinformation campaigns as two types of new threats.

"Russia is much more assertive than it was 10 years ago. It's got some self-confidence now as it reasserts itself as a global power," Carter told BBC television.

"Cyber is part of that, what happens in space is part of that, disinformation, subversion, manipulation, assassinations, and of course the use of mercenaries, which are very easily undeclared and non-attributable," he said.

"Reckless behavior and the lack of respect for international law relating to these new types of 'weapons' risks escalation that could easily lead to inadvertent miscalculation," Carter separately wrote in The Sunday Telegraph.

But Carter said this "deniability" is a tactic now being perfected by Britain's main foes.

His media appearances are timed to remind Britons of the challenges they still face on Remembrance Sunday -- the day the country honors those who fought and died in World War I and subsequent conflicts.

It also comes with U.S. President Donald Trump wavering on Washington's commitment to the NATO military alliance and French President Emmanuel Macron promoting the idea of a European army.

Britain wants to preserve NATO as it prepares to leave the European Union after nearly 50 years.

"I have seen absolutely no evidence of any military planning to suggest that we are going to have a European army, and no declaration to that end has been made," Carter told the BBC.