French Envoy Arrives in Beirut for Talks with Top Officials 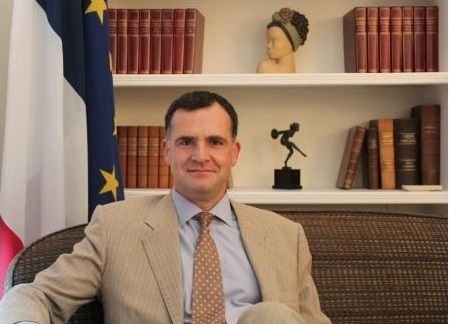 The director of the Middle East and North Africa department at the French foreign ministry, Christophe Farnaud, arrived Tuesday afternoon in Lebanon for talks with top officials.

Earlier in the day, several prominent civil society groups such as Beirut Madinati and the Legal Agenda said they had declined invitations to hold meetings with Farnaud, who has apparently sought to explore the stances of the protest movement.

Al-Joumhouria daily reported Friday that France is seeking to help Lebanon resolve the crisis of forming a new government in light of the stalled efforts and the swelling street protests against the political elite.

High-ranking diplomatic sources told the daily that France was exerting “unremitting, robust efforts” to push for a solution.

Saad Hariri tendered his government's resignation on October 29 in response to pressure from the nationwide protests.

The top officials you need to meet are too busy protesting on the streets.

I hope you brought a fresh pair of Pajamas with you for Mr. Aoun

Why dont madinati and legal agenda want to meet with him? Because they have no program. Just fachit khilk. No vision.shame on them.

Lebanon does not have "top" officials..

meet the people on the street, they speak 3-4 languages, understand what is happening, are part of the struggle, hurt and without these Lebanese people, there is no solution..

Meet them French Envoy... and make sure you listen carefully