Lebanon: One Month of Protests 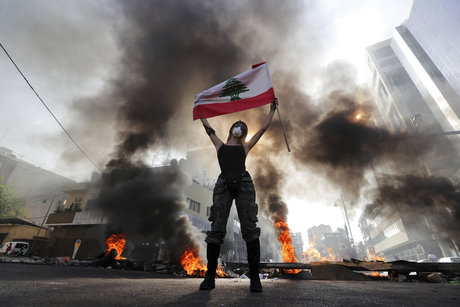 Lebanon has been paralyzed by nearly a month of mounting protests demanding an overhaul of the entire political system.

Here is a recap:

On October 17, the government announces a tax on calls made via messaging apps such as WhatsApp, widely used in Lebanon.

Coming amid a looming economic crisis in a country whose infrastructure remains decrepit almost three decades since the end of its civil war, the announcement is seen by many as a step too far.

Thousands take to the streets in Beirut and the cities of Sidon and Tripoli, some chanting "the people demand the fall of the regime".

There are clashes near government headquarters in Beirut as demonstrators try to storm the building.

The government scraps the messaging app tax later the same day, but the protests continue.

On October 18, thousands of demonstrators from a broad spectrum of sects and political affiliations bring the capital to standstill.

They demand an overhaul of the political system, citing a broad range of grievances from austerity measures and state corruption to poor infrastructure and rampant electricity cuts.

The army reopens some highways and disperses a huge crowd in central Beirut with water cannon and tear gas. Dozens are arrested.

The demonstrations swell over the following days, with major gatherings also in second city Tripoli and other centers.

On October 19, the Lebanese Forces party pulls its four ministers from the cabinet.

On October 21, Prime Minister Saad Hariri announces his government has approved a raft of economic reforms, including halving the salaries of lawmakers and ministers.

But protests continue and demonstrators dismiss the new measures as insufficient.

On October 25, the leader of Hizbullah -- which with its allies holds a majority in parliament -- tells supporters not to take part in the protests.

On October 29, dozens of counter-demonstrators attack anti-government protesters in Beirut, torching tents and tearing down banners.

That evening, Hariri submits his resignation and that of his government, prompting cheers and dancing in the streets. It is the 13th day of protests.

The following day, President Michel Aoun asks the government to stay on until a new cabinet is formed.

Protesters regroup over the next days, demanding a government of experts, independent of traditional political parties divided along sectarian lines.

In a live television address on November 3, Aoun announces plans to tackle corruption, reform the economy and form a civil government.

On November 6 hundreds of schoolchildren lead demonstrations across the country. The following day thousands of university and high school students also take to the streets.

On November 12, Aoun says in a television interview that Lebanese unhappy with those in power should "emigrate." He also criticizes the protest movement's lack of leadership.

His remarks spark a new eruption of demonstrations, with protesters blocking off roads in the capital.

An army officer’s driver opens fire during a road-blocking protest in Khalde south of Beirut, shooting a man who later dies of his injuries.

So, Aoun comes up with half-measures that the people reject and his response is that they should emigrate??? Leave Lebanon? That is the solution. We already do not have enough resident Lebanese and he wants the ones who really care for the country to leave?? Maybe he should