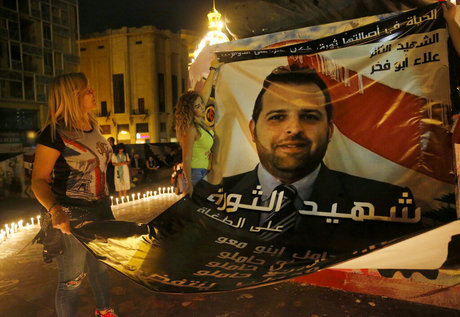 An army intelligence agent involved in the Khalde incident that resulted in the death of the protester Alaa Abu Fakhr was referred to the judiciary on Wednesday.

“The Intelligence Directorate has referred First Adjutant Charbel Hjeil to the relevant judicial authorities after interrogating him over the incident that resulted in the martyrdom of Alaa Abu Fakhr,” the Army Command’s Orientation Directorate said in a statement.

Media reports said Hjeil was in a white vehicle carrying an army colonel when an altercation with protesters erupted in the Khalde area where demonstrators were blocking the road.

An army statement issued Tuesday had said that military personnel opened fire in a bid to disperse protesters.

Well with military courts made of corrupt magistrates like Peter Germanos, the assassin soldier will end up freed like Suzanne el Hajj. All Aounis are corrupt .

The Army will show how the victim was Charbel Hjeil and set him free in a few months...
Corruption goes deep in the military and for those who still believe that the Lebanese army is going to rescue the nation one day....keep dreaming they too are Lebanese and given power have become corrupt too.

The army owns hotels and resorts... I mean where else in the world does this happen ? Probably in Sissiland and other banana republics .... but not in the civilized world.