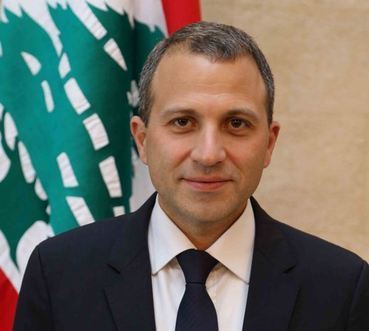 “The priority today is to form a government of salvation and prevent destructive thought from taking the country into a clash. Beware of the walls of segregation that drag people into infighting,” said Bassil in a tweet.

He added addressing his Free Patriotic Movement partisans: “You must not make any reaction because the conspiracy is starting to unfold and the good people among demonstrators and people at home will bring it down. ”

On Wednesday, protesters inside Jounieh’s Nahr al-Kalb tunnel removed a cement wall they were constructing earlier.

I wish he would run for president!
He’ll then see how little pathetic support he has.
What a hypocrite!!!! He tells his Aounis FPM... isn’t it a fact that when you support the FPM flag, isnt that a separation wall.
This guy removed his money than he removed the secrecy off his bank account (anyone remember how much time he had, lol)
Jail is is fate! BY THE PEOPLE. BASIL! A Traitor!!!! To the flag?

باسيل «فخامة الوزير»
called it right from day one: this is an American/Israeli/ Saudi conspiracy against the strong Presidency.

hahaha, did you just state "the strong presidency"???

He is nothing but a foreign tool... a project serving foreign governments..
likely serving the same governments you have listed..

Nothing Lebanese about the old man sitting on the chair or his son-in-law..
They're thugs, thieves and foreign tools

A truck loaded with bricks and construction materials pulls up to the demonstration near the tunnel the guys in it tell the demonstrator we need to block the tunnel with these so no one will pass. In their excitement some of the demonstrators join in and start helping them with the construction. Other demonstrators step in to stop it, and remove it. The truck and the guys are nowhere to be found. Aounist social medias were already in Goebbels mode accusing who they called "LF militia" of constructing a wall inside the tunnel. The more things change the more Aounists stay the same.

so Mazraat Yashou3, FPM thugs beating up women and children to open the road and yesterday in Jal El Dib, a Aouni with a AK47 and his friends with knives and chains is nothing...but small bricks is the deal breaker for a civil war

Bassil is in no position to lecture us, advise us, or to give us his opinion.
He was elected head of his party by jeddo, because otherwise, he would have lost to Alain Aoun.
This despicable person better stfu!