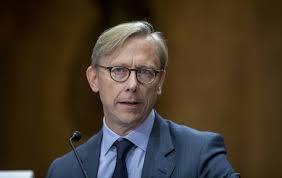 A State Department investigation Thursday faulted the U.S. pointman on Iran over the removal of an employee of Iranian origin, voicing alarm about discussion of her ancestry.

Under pressure from lawmakers, the State Department's inspector general probed the early removal of Sahar Nowrouzzadeh, a career employee and U.S. citizen, from the Office of Policy Planning, the internal think tank that sets priorities for U.S. diplomacy.

The long-awaited report by the internal watchdog said that the White House, two months after President Donald Trump took office in 2017, forwarded an article in conservative U.S. media that was critical of Nowrouzzadeh's continued position and highlighted her ancestry.

Julia Haller, a short-term liaison from the White House in charge of political appointments, in an email cited by the report said Nowrouzzadeh "was born in Iran and upon my understanding cried when the President won."

Hook, who has championed Trump's hard line on Iran and was then head of policy planning, removed Nowrouzzadeh in April 2017, three months before her one-year appointment made under former secretary of state John Kerry was due to run out.

The report found no evidence that Hook personally shared bias based over Nowrouzzadeh's Iranian origin but said he did not refute the campaign against her, either.

"The comments regarding her perceived place of birth are particularly concerning," the report said.

"Regardless of whether Mr. Hook personally shared the opinions and motivations expressed by Ms. Haller and others, the comments about (Nowrouzzadeh) in the articles and emails circulated within the Office of the Secretary suggest that improper factors likely influenced the requests to end her detail," it said.

Nowrouzzadeh -- who left to take a fellowship at Harvard University, where her biography says she was born in Connecticut -- hailed the report and said that she "proudly" served the United States across Republican and Democratic administrations for 15 years.

"I continue to strongly encourage Americans of all backgrounds, including those of Iranian heritage, to consider public service to our nation and to not be discouraged by these findings," she wrote on Twitter.

The inspector general recommended training on personnel practices and said Pompeo "should consider whether disciplinary action is appropriate."

The State Department in a response said Pompeo would consider discipline but set no timeline.

One of Pompeo's top aides, Ulrich Brechbuhl, wrote that the State Department disagreed with the report's conclusions.