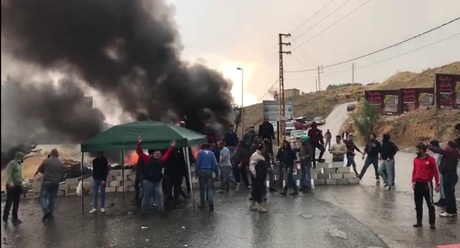 Reports that political parties agreed to nominate ex-finance minister Mohammed al-Safadi to line-up the new Lebanese government did not appease the 30-day old uprising demanding an overhaul of the entire political class.

Late on Thursday protests erupted in anger over the news that Caretaker Prime Minister Saad Hariri has reportedly agreed with Hizbullah, the AMAL Movement and the Free Patriotic Movement on nominating Safadi for the premiership.

They blocked the Zouk Mosbeh highway with burning tires and a protest got underway outside Safadi's house in the northern city of Tripoli.

Al-Joumhouria newspaper quoted “observers” who wondered if Safadi’s nomination was a “trap” to upheat the revolution or a “solution” to meet the people’s demands.

Safadi himself did not comment on the matter, said the daily. But a source close to him said: “Nomination of the new prime minister takes place during binding parliamentary consultations with respect for the Constitution and the position.”

He stressed that "any government must meet the aspirations of the people and their demands."

Safadi’s reported nomination emerged after a Center House meeting between Hariri and the political aides of Sayyed Hassan Nasrallah and Speaker Nabih Berri.

Center House sources meanwhile told the Hariri-affiliated Mustaqbal Web news portal that the discussions tackled consensus on Safadi's nomination but not the shape of the new government or al-Mustaqbal Movement's participation in it.