Qaouq: Some Planting Mines in Way of Govt. Formation 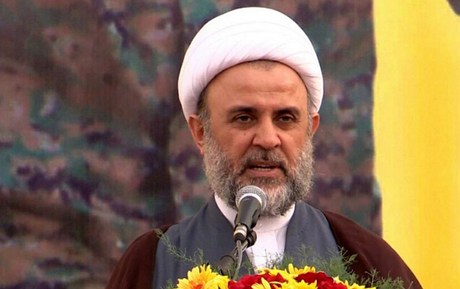 A senior Hizbullah official on Sunday accused some parties of “planting mines in the way of the government formation process” in a bid to “change the political equations” in the country.

“Regardless of the government’s shape and whoever its premier might be, Lebanon will not have a government subject to American diktats that would work on implementing the U.S. wishes at the expense of the Lebanese interests, specifically at the expense of Lebanon’s strength in resistance,” Hizbullah central council member Sheikh Nabil Qaouq said.

“From the position of historic national responsibility, Hizbullah has managed to thwart strife and Israel’s civil war ambitions, and it is keen on facilitating all contacts and consultations for the sake of forming a new government,” Qaouq added.

Noting that “U.S. policy and Saudi electronic media sought to push citizens into clashes on the streets and were waiting for the eruption of strife among the Lebanese,” the Hizbullah official acknowledged that protesters on the streets “are rallying in order to rescue the country and demand their social rights.”

But he warned that “those who infiltrated the popular protest movement, be them political parties or U.S. interferences, do not want to rescue the country but rather to bring it down in order to achieve political gains.”

America wants to form the new Lebanese government, and it is about time we crushed the american shackles around Lebanon and turned to a new growing super power such as China, we can do real business with.

Yes, China will do just the right thing with you as they are doing with the Uyghurs in the Xinjiang re-education camps.

Good luck for any religious figure keeping his beard then lol.

France and America had too much power over Lebanon for too many centuries, we don't need the West, the western sanctions are the reasons for bringing this country down.

When did America colonize the Middle East, was it three centuries ago or even earlier ? Please enlighten us, we are uneducated people, blind followers of ayatollaz, we require your science to evolve. Perhaps you’re referring to France and its Frankish crusaders who left the levant 8 centuries ago ? That’s about the same time the Shia left Yemen and emigrated to Lebanon.

Colonized Lebanon until the Resistance got rid of their barracks in the 80s, they occupied Iraq, they are occupying Syrian oil fields, we can go on and on about american colonialism.

No such thing as 'resistance'---that is a term iran uses to make its armed terror groups around the world sound legitimate or official, you know, like Jerusalem day. And your kizb is occupying lebanon, like Syria, Israel and France before it--they are an armed force funded and supplied by a foreign nation, so no difference between them and their sponsors.

Mystic, please stop saying stupid things, let us assume now that the US imposes sanctions on Lebanon making it impossible to back the LBP in Dollars.
Well, you see, our economical status will be much like the one in Venezuela and we will run out of food, fuel, and medical supplies very fast.

Lebanon is only colonised by Iran. And by no other country.

Has this crow ever done anything good for Lebanon apart from preaching hatred and death? A terrorist by any other name....