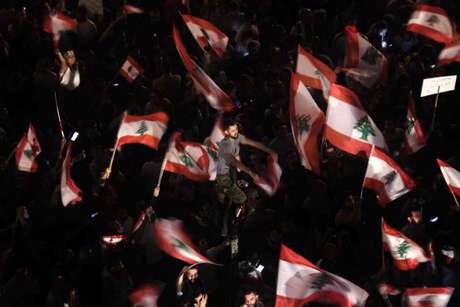 Lebanon’s protests have shown unusual, overt anger at the country’s powerhouse, Hizbullah.

The Shiite group has long enjoyed a reputation among its supporters as a champion of the poor and defender of the country against Israel. That’s helped it dominate Lebanon’s political scene.

But now protesters want that entire political elite out — including Hizbullah — and even some among its Shiite supporters are angry over economic woes.

Hizbullah and its ally, the Amal party, have enjoyed overwhelming backing among the Shiite community since the end of the 1975-1990 civil war, making them a political powerhouse that has dominated recent governments.

But now many protesters group Hizbullah into the ruling class that they are revolting against and blame for wrecking the economy with years of corruption and mismanagement.

Thats definately one of the most worrying aspects of it. In the 1970s, the shia population in Lebanon was rather relaxed when it came to religion/fanatism. Almost 40 years of Hezbollah indoctrination has made the people into parrots who just repeat what their leader says, robot who just do what he tells them to do. I am not so optimistic, but I hope that they will be able to turn their minds into free-thinking mode someday.

Yes before the Civil war shia people were peasants and errand boys for the wealthy Sunni tradesmen and Christian businesses.

Now it means something to be a Shia in Lebanon, and not the lowest sect class of them all.

An Nahar propaganda likes to turn the protests into a conflict against Hezbollah, even though Hezbollah is least the corrupt party in Lebanon.
The few Shia that did protests, they were the ones that scuffled with Geageas people when they started smearing Sayed Hassan.
Shia people know, that without Hezbollah they will be treated as second class citizen and will be the lowest of the low like they were before the Lebanese civil war.

Why doesn't Hezbollah put its power on the streets in political agitation to abolish the "constitutional" requirement that Christians get half the seats in the parliament (Article 24)? Isn't that Article the certificate of Shia (not to mention Sunni) slavery?

Seriously, for shia being at least a third of the population, the percentage of them with advanced degrees like engineering and medicine is much lower than with other sects. Go to better hospitals in the country and you will find lots of Sunni, Christian, and Druze doctors, but very few Shia. These hospitals don't care about your sect like AUBMC, CMC, and Hotel Dieu.

I don't think it is an intelligence thing---I think it is mostly that the 2 shia parties don't want to educate a lot of them because they fear they will abandon them after they get their degrees. Most are given these low paying government jobs to keep them employed, but also poor. Amazing how many people in EDL are from Nabatieh

Samiam, what is wrong with Nabatieh?