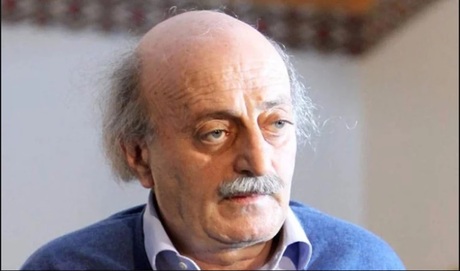 Progressive Socialist Party leader ex-MP Walid Jumblat on Monday slammed the country’s top decision-making authority whom he said was “schizophrenic,” as the country enters day 33 of nationwide protests demanding an overhaul of the political class.

“Schizophrenia prevails in the higher decision-making circles, which cannot cede power in exchange for a modern transitional alternative to the Third Republic, now that the Second Republic has died,” said Jumblat in a tweet, referring to the term of President Michel Aoun.

“More importantly, the PSP believes that modernization and change are important in order to meet the challenges. To be or not to be..." he added.

Nationwide protests erupted in Lebanon on Oct 17 demanding an overhaul of the entire political class.

Hariri resigned on Oct. 29 “in response to protesters’ demands.” Since his resignation, parties have not been able to form a new government due to political conflicts.

On Sunday, the political crisis worsened when the outgoing prime minister (Hariri) harshly criticized the Free Patriotic Movement --the party of the country’s president-- blaming it for weeks of delay in forming a new Cabinet amid ongoing anti-government protests.

Aoun has yet to call for consultations with parliamentary blocs’ leaders to name a new premier, nearly three weeks after Hariri resigned.

Some major factions in Lebanon’s sectarian political system want to keep Hariri in the new government. But they want him to form a cabinet of politicians and technocrats. He’s insisting on only technocrats.

Aoun’s party on Sunday responded that Hariri’s stance intends to dominate the new Cabinet by insisting “it's either me or no one else in the government.”

The exchange of blame and criticism between Hariri’s office and Aoun’s party come as Lebanon is passing through its worst economic and financial crisis in decades.

Lebanon is one of the most heavily indebted countries in the world and was already dealing with a severe fiscal crisis before the protests began, one rooted in years of heavy borrowing and expensive patronage networks run by entrenched political parties.

Look who's talking about schizophrenia: it takes one to know one!

Everybody knows that the final targuet of the tripolli spring is the political power of the cristhians!!! And the integration of the refugies...

The Whaabis wants to control the political system in Lebanon...convert or die, is the message of the whaabism to the cristhians...the tripolli daesh movements in lebanon

The political class is responding to the crisis like small children who are having their candy taken away from them. In this case, the people in the Street is not the cause for them losing their candy, but their presence in the street is only one effect of the bigger cause.

The bigger cause is that the political class has bled the country white of hard western currency. What they have not stolen and stashed in anonymous accounts, they have used for political patronage payments while the national interests were ignored. Money for water treatment plants, stuffed in their pockets while Lebanon's rivers, streams, lakes and sea coasts are stuffed with raw sewage and worse. The vegetable crops irrigated with water containing raw sewage is bringing cancer to the people. The air pollution - cancer; the plastic pollution - kills the fish. No trains or buses, just people in cars on streets with potholes and no lanes of traffic or traffic control.