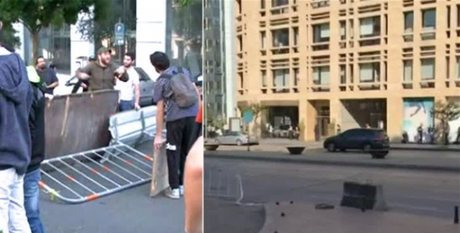 Gunshots were fired into the air on Tuesday when a lawmaker’s convoy was making its way by force through crowds of protesters in Beirut's Bab Idriss area blocking routes to the parliament building.

The gunshots were fired from inside the vehicle according to a video footage filmed by one of the protesters. No one was hurt in the incident.

But in remarks made to reporters, Khalil said it was not his, “I have been here since 8:00 a.m,” he said.

The Minister later told reporters standing outside the parliament building: “I was giving a statement to you when the incident happened. I have spoken with the Minister of Interior and told her that the duty of security sources is to open the road for deputies to reach the parliament instead of filing random accusations.”

Lebanese protesters from different parts of Lebanon formed a human chain on Tuesday blocking roads leading to the parliament assembly in Downtown Beirut to stop lawmakers from attending a legislative session they deem as "unconstitutional".

Who was the lawmaker?

Ah..Jreissati...I ought to have guessed it...

It’s time to step it up, we should use Molotov cocktails against these cars shooting at the people .