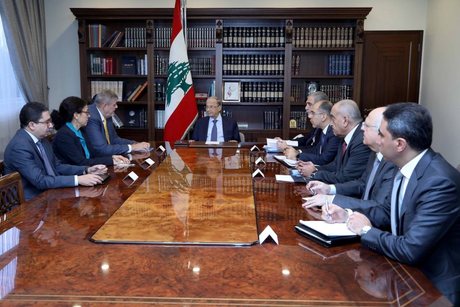 Amid nationwide protests demanding the formation of a new government of technocrats, President Michel Aoun on Tuesday said the new government will be composed of “politicians, experts and representatives of the Movement.”

“The new government will be political and will include specialists and representatives of the popular Movement,” said Aoun during a meeting with UN Special Coordinator for Lebanon Jan Kubis at Baabda Palace.

He said that “the economic and financial situation is being observed and addressed gradually.”

The President told Kubis that he "will set a date for consultations as soon as he concludes his consultations with the political leaders in charge of forming the government."

Aoun: I am willing to meet with representatives of the Movement to inform them of my efforts to meet their demands.
Please can someone fluent in the language spoken on the moon to explain to him, in his language, for the millionth time this is a leaderless popular movement!

"the new government will be composed of “politicians, experts and representatives of the Movement."
Thank god. At last the foreign embassies will have representatives in the government, and not just members of Hezbollah like in previous governments.

"The parliamentary consultations were not set because first we have to eliminate the obstacles facing the government formation and facilitate the task of the PM designate."
He's expropriating the role of the members of parliament and neglecting his own constitutionally dictated duty to call for binding consultations.

He doesn't get it! Any "technocrat" that will accept to be in a mixed governemnt also composed of politicians will be REJECTED by the People! Resign old man! RESIGN!

Seriously, he doesn't get it. Politicians robbed the country blind--who is he going to put in there who hasn't done this? And we don't need technocrats, we need doers, not talkers. Put a project engineer on the Energy and Telecom ministries---they will get stuff done, not sit around and dream, blame and do it some more. Put in a judge in the justice ministery---not some FPM fool.

And Aoun may have sealed his fate as the worst president ever. Congrats.

Dudes.. he probably doesn't remember this.. but he's already asked.. to meet with representatives of the Movement.. like at least.. four times since the 17th of October.. and he was told.. "dude.. that's impossible.. there aren't any".. like five times... OK, this is getting critical.. my medical diagnoses.. the old dude's presenting.. with a severe case of Aounesia.. caused by an acute.. case of Aounzheimer's.. a disease that makes.. Al's zheimer look like a paper cut!.. The only treatment.. in my expert opinion.. Aounputate, now.. before he gets an Aouneurysm!..