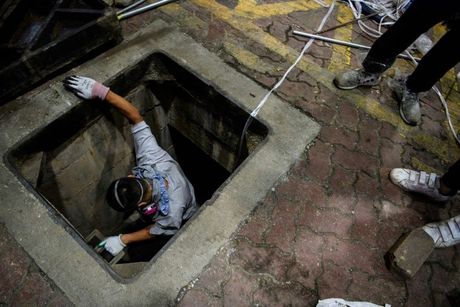 Arms covered in cling film and torches in hand as they drop into the sewers, clusters of pro-democracy protesters still inside a Hong Kong campus are plotting increasingly ingenious -- and desperate -- ways to escape a police siege.

Among the detritus of a scorched and graffiti-sprayed concourse at Hong Kong Polytechnic University, several plastic covers -- some with torches placed above them -- betray extraordinary underground escape plans.

Protesters have removed metal manholes, some making exploratory forays into the fetid tunnels, following rumors of successful exfiltrations from a campus ringed for three days by baton-wielding police determined to arrest them.

Pockets of protesters, some with thick bandages wrapped around their knees in anticipation of a long crawl to freedom, knot the holes discussing an unlikely -- and highly dangerous -- breakout.

AFP reporters saw one group on their stomachs practicing crawling. Another group hugged each other in consolation after apparently agreeing not to take the route down into the unknown.

"The people outside can't help us," a protester told local television as he prepared to descend into a sewer. "So what can we do?"

One protester, gas mask on, and cling film wrapped around his arms, carried a torch as he descended with his backpack down the metal rungs into the subterranean gloom.

Desperation has stalked the protesters for two days since an occupation of the city center campus turned into a police siege.

"We can get through today... I don't know about tomorrow," Fung, 43, a kitchen volunteer helping feed protesters in a campus canteen told AFP on Monday.

So far the daring escape bids have been matched by their danger.

Late on Monday dozens of protesters in civilian clothes slid down several meters of rope onto a flyover, where a cavalcade of motorbikes conducted a smash and grab rescue mission.

Police said 37 of the escapees and bike drivers were later arrested -- but many others are thought to have got away.

Earlier Monday scores of protesters faced a gauntlet of batons from Hong Kong's bruising riot cops as they made a dash along another bridge.

Some escaped but images showed those who did not on the receiving end of brutal flurries of baton strikes, kicks and stamps.

On Tuesday a group of around 20 protesters who had moved from the campus into a nearby building overnight slipped away, after riot police left their post.

"It's at most 10 years in jail if I am convicted of rioting," said Issac, aged 17. "But it will be a whole life in a larger prison if I stop coming out."

The teenager said that although his decision to leave would give him "a sense of shame", the remaining protesters needed to split up.

"I knew we couldn't leave together," he said. "But If we all got trapped and arrested, the movement would fail and die because I believe most of the frontliners were on campus."

Under-18s have also been escorted out by teachers -- their details taken but not immediately arrested on exit from the campus -- while Monday was pock-marked by sporadic failed escape bids by clusters of protesters.

Inside, desolation has replaced defiance.

"Liberty or Death" has been sprayed on the glass entrance to one building, where a 7/11 has been looted and a Bank of China ATM has been smashed up.

Classroom furniture, bottles for petrol bombs, mats, bollards and bins are chaotically piled across the campus, whose walls are scarred by scorch marks from large fires.

Black clothes, the color of a rebellion whose narrow initial aims against a specific law have widened into calls for democracy in Hong Kong, are strewn everywhere as the mainly young activists shed protest 'uniforms' before making a break for it.

A hardcore contingent remains, willing to defend the campus despite stark warnings by police that officers are ready to use lethal force if they come under attack.

Tears in his eyes, exhausted and injured in one leg, Wong explained the dilemma of a youth movement whose lives have been upended by months of protest.

"If I give up can I face those who have sacrificed?" he said, of those arrested in the campus siege.

"I don't mind giving up my future so that others can step on our bodies and keep going forward."