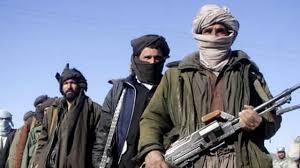 The Taliban handed two Western hostages over to U.S. forces in southern Afghanistan Tuesday, three years after they were abducted, in a successful swap for three high-ranking insurgent prisoners that could boost peace talks.

The exchange of American Kevin King and Australian Timothy Weeks for the militants -- including Anas Haqqani, brother to the Taliban's deputy leader -- was termed a "confidence-building" measure by both the Australian government and the insurgents.

"We are profoundly pleased and relieved", Australian Prime Minister Scott Morrison said in a statement, adding that Weeks' family had asked the government to convey their relief and gratitude.

King and Weeks, both professors at the American University in Kabul, were kidnapped by gunmen wearing military uniforms in the heart of Afghan capital in August 2016.

They later appeared looking haggard in a Taliban hostage video, with the insurgents going on to say that King was in poor health.

They were freed at around 10:00 am and flown out of Zabul on American helicopters, according to a local police source. American media cited King's family as saying he was receiving medical care in US custody.

The insurgents were released in Doha, where the Taliban maintain a political office, a tweet from their spokesman in the Qatari capital Suhail Shaheen confirmed.

The Taliban's main spokesman, Zabihullah Mujahid, said the transfer of the Taliban prisoners "is complete, and they have arrived where they were supposed to come".

The swap could indicate a breakthrough in stalled efforts to bring the Taliban to the negotiating table with the government in Kabul and begin work towards a political settlement ending their 18-year insurgency.

The joint statement from Morrison and Australian foreign secretary Marise Payne called it a "confidence-building" measure" they hoped would "set the stage for a ceasefire and intra-Afghan dialogue".

Mujahid said the swap was "a step forward in good-will and confidence-building measures that can aid the peace process".

There was no immediate comment from the U.S. embassy in Afghanistan Tuesday, and Afghan officials in Kabul said they would release a statement later.

The American University in Kabul said it "shares the relief" of the hostages' families.

Anas Haqqani, whose older brother Sirajuddin is the deputy Taliban leader and head of the Haqqani network, one of the militant group's deadliest factions, was seized in 2014.

Afghan authorities accuse Anas of being a high-level player in the network. The Taliban has long demanded his release, insisting he is a student.

The other two freed Taliban are Haji Mali Khan, believed to be the uncle of Sirajuddin Haqqani, and Abdul Rashid, said to be the brother of Mohammad Nabi Omari, a member of the Taliban's political office in Qatar.

Mujahid said the Taliban had also released 10 Afghan soldiers along with the Western hostages.

When Ghani had first announced the potential exchange on November 12, he said that the release was conditional, and that Kabul had taken steps to ensure the militants would not return to the front line.

He said he hoped the swap would "pave the way" for the start of unofficial direct talks between his government and the Taliban, who have long refused to negotiate with Kabul.

Since September 2018 Washington and the Taliban have been holding direct talks, seeking an agreement that many hoped would see US troops begin leaving Afghanistan and the militants start negotiations with Kabul.

They were on the verge of a deal when U.S. President Donald Trump scuttled the talks in September, citing Taliban violence.

Most observers agree that a political settlement is the only way towards lasting peace in Afghanistan, and both the U.S. and the Taliban left the door open for talks to resume.

Pakistan's prime minister Imran Khan, whose government had helped facilitate the talks between the insurgents and Washington, also said he hoped the release would give a "boost of confidence" to all sides to re-engage.