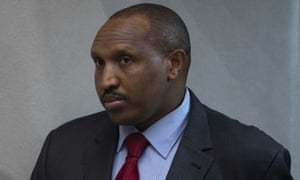 A Congolese warlord was sentenced to life imprisonment on Tuesday for leading the mass rape of hundreds of people in the country's volatile east last year, following accusations by the Nobel Peace Prize winner Denis Mukwege's foundation.

Frederic Masudi Alimasi, also known as Kokodikoko, was found guilty of "crimes against humanity including rape, poison, torture, murder, and sexual slavery", the head of the military tribunal in Bukavu city said.

Kokodikoko is the leader of the Raia Mutomboki militia, one of dozens of groups who have terrorized civilians in the two Kivu provinces in the Democratic Republic of Congo for the last 25 years.

The militia is accused of raiding the village of Kabikokole during the night of February 8, 2018. The trial has been ongoing since mid-September in South Kivu province.

"They took more than 100 women hostage... to rape them one after another," said the Panzi Foundation of Mukwege, who was awarded the Nobel Peace Prize last year for helping women recover from rape.

AFP heard testimonies from victims who supported the accusations in March 2018, including from two women aged 19 and 36 and a ten-year-old girl, hospitalized at Panzi Clinic near Bukavu, which treats female rape victims.

"The Congolese state is incriminated for failing in its sovereign duty to protect and secure the population," the Panzi Foundation said.

Two other militiamen were sentenced to 15 and 20 years in prison and two others were acquitted on Tuesday.

Damages must be paid to the 307 victims, the court said.

One of the defendant's lawyers, Ester Bashugi, said they would appeal the verdict.