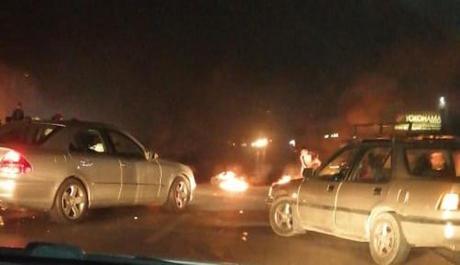 The protesters first blocked the vital Ring highway in central Beirut. Road-blocking action later spread to the highway that links Beirut to the South with protesters blocking it in the Naameh area.

The army meanwhile prevented protesters from blocking the road near the presidential palace in Baabda.

In his speech, Aoun blamed the delay in forming a new government on Lebanon’s “contradictions,” as he re-invited protesters to dialogue with him, noting that he wants to “closely explore their actual demands and means to implement them.”

Protesters have repeatedly rejected calls for talks with the president, noting that their demands are well-known.

Lebanon's unprecedented protest movement, which broke out on October 17, has been calling for a complete overhaul of a political elite accused of inefficiency and corruption.

After the government stepped down on October 29, protesters demanded a fresh cabinet composed of experts not affiliated with any of the traditional political parties.

But Aoun in a recent interview argued that a government made up solely of independent technocrats would not represent the people or be able to set policies.

"Where should I look for them? On the moon?" he said, arguing true independents were scarce in a country where most people follow a specific political party.

"Where should I look for them? On the moon?" he said, arguing true independents were scarce in a country where most people follow a specific political party.

Here is an admission that could only be construed as an oxymoron statement!