Report: ‘Shadow Government’ Could Be Formed to Speak for Protesters 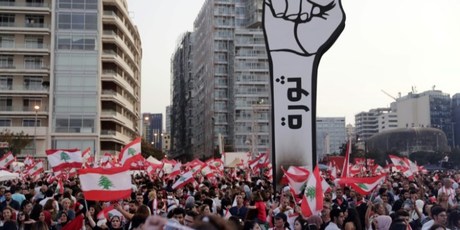 Lebanon’s protesters are reportedly inclined to form a “revolutionary government” to manage the affairs of the popular movement if President Michel Aoun fails to initiate the binding parliamentary consultations by the end of this week, the Kuwaiti al-Anbaa daily reported on Tuesday.

Asked if the “revolutionary government” was meant to rebel against the constitutional authority, a senior source told the daily: “It is a shadow government, similar to the youth shadow government proposed by An-Nahar Editor-in-Chief Jebran Tueni before his assassination."

He said: “A decree was issued by the Cabinet in 2006 and two were formed between 2007 and 2008. It consisted of university students and people of competence.

"A revolutionary shadow government will not have a president, and will be the mouthpiece of the movement to negotiate with the authorities and all parties,” added the source who refused to be named.

President Michel Aoun has said he will support the formation of a government including technocrats but he has not yet announced consultations over a new line-up.

Kuwaiti news source anonymously identified the protesters mentioned in the story: Ann from Kansas City and Carl from Milwaukee. Ann would be Patriarch and Carl would be the rest of the government. They are phoning in their participation in the protests in Lebanon due to prior commitments elsewhere.