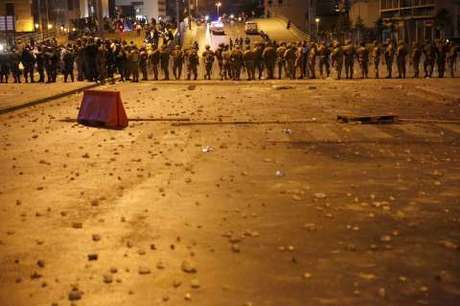 Following Monday’s violence between Lebanese protesters and supporters of Hizbullah, the security and military forces are “determined” to ban road blockages in order to spare Lebanon from a “worst-case scenario,” al-Joumhouria daily reported on Tuesday.

A prominent security source disclosed that during recent security meetings, discussions have focused on this scenario considering it the “most dangerous because congestion will generate a blast and road blockages will end with clashes,” he told the daily.

The violence began on Sunday when supporters of Hizbullah and AMAL Movement attacked protesters who had blocked a main Beirut thoroughfare known as the Ring Road — a move the protesters said was aimed at exerting pressure on politicians to form a new government after Prime Minister Saad Hariri offered his resignation Oct. 29.

“Security and military engagement will be different in the next stage, hitting with an iron fist will be the policy to adopt in the coming phase after we saw the street sliding off limits. The decision has been made to strictly ban road blockages from now on, and the military will be decisive in this regard,” affirmed the source who spoke on condition of anonymity.

On Monday evening, Army troops and security forces quickly intervened after Hizbullah and AMAL supporters arrived at Beirut’s Martyrs Square on scooters and hurled insults and a few rocks at protesters who have an encampment in the area.

Later on Monday, gunfire erupted in the Beirut area of Cola after convoys of motorcycles passed in the area. The convoys had roamed several streets in Beirut and its suburbs.

Supporters of al-Mustaqbal Movement had earlier blocked the Qasqas road in Beirut after Hizbullah and AMAL supporters passed in the area on motorbikes and shouted slogans. MTV said gunshots were also fired in the air there.

The army quickly intervened and deployed in the area.

Where was that determination in arresting even a single one of hundreds of thugs causing public and private property damage in plain sight?

Berri and jumblat want the road open, but they are dead on ears to listen to the millions of people, also dead on ears to catch those destroyed public properties downtown of Beirut.

This is a statement from the corrupt Lebanese Army, the same army that never arrested terrorists shooting in Beirut at the Cola roundabout or in Tyre's Alam square. This is the LAF that should have its pension slashed by 90% because they don't deserve Sate money and aren't worthy of the national debt growing because of their high numbers and uselessness.