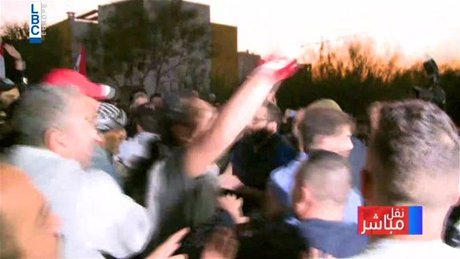 Supporters of the Free Patriotic Movement on Tuesday briefly scuffled with protesters near the presidential palace in Baabda, as backers of Hizbullah and the AMAL Movement attacked the main protest site in the eastern city of Baalbek.

The civil society protesters in Baabda were led by groups from the Sabaa Party.

The FPM supporters sought to prevent protesters from chanting against President Michel Aoun before the scuffles erupted.

Security forces quickly intervened to contain the situation and the army has since reinforced its presence in the area.

Elsewhere, Hizbullah and AMAL supporters attacked the protest site at the Khalil Mutran Square in Baalbek and vandalized the encampment.

Tensions have surged across the country since Sunday night, when supporters of the two political parties attacked protesters in central Beirut.

A deadly car crash near a protest roadblock on Jiye’s highway has aggravated the already high tensions.

Tricster ... You are one of the few people on this forum that sounds like Daesh!

A doppelgänger of another shia troll who reinvented itself.

and how many women and children did your terrorist filthy militia massacre in Lebanon, Syria, Iraq, Yemen, etc. under the name of your hussain?

Mastica and nopasaran... why in hell do you bring up Geagea.
I tink that you like to insult him because the guy kind of scares you...

Shame on you for using Dr. Geageas name to spread lies and division. There's no such thing called "salafistes" and there will never be. You are probably a troll trying to spread fears of Geagea among Lebanese. Shia Iranian troll.