Mothers, Residents of Ain el-Rummaneh, Shiyyah March Together after Unrest 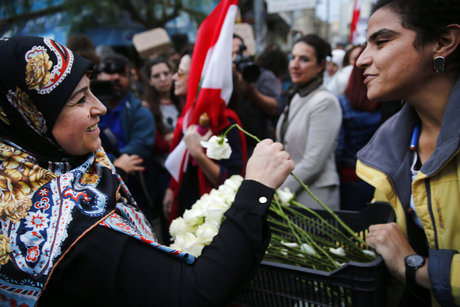 Mothers and residents of the Beirut suburbs of Ain el-Rummaneh and Shiyyah on Wednesday marched together in a solidarity rally, following overnight unrest in the area.

The gathering started outside the landmark Sannine Roastery in Ain el-Rummaneh at the invitation of Lebanese mothers and women who called for rejecting “all the scenes that the streets witnessed over the past two days” and denouncing “segregation and the return to the rhetoric of frontlines and war.”

The demonstrators carried Lebanese flags, banners and white roses amid heavy media coverage and security measures by the army and the Internal Security Forces.

After chanting the national anthem, the women and residents chanted against civil war and called for national unity.

“We, the mothers of the country won’t accept its segregation”, one of the banners read.

The demonstrators then marched towards the Asaad al-Asaad street in Shiyyah, where they were welcomed with cheering and clapping, as women threw rice on them from balconies. Residents of Shiyyah joined the demo at this point and voiced similar calls for unity.

Many of those who took part in the unity move noted that the two neighborhoods’ residents have coexisted for decades and that the two areas have become largely mixed in terms of residence, markets and social activities.

Stone-throwing clashes took place between young men from Shiyyah and the adjacent Ain el-Rummaneh and were quickly contained by the army.

Tensions regularly erupt in this area which saw the first clashes of the 1975-1990 civil war. A shooting in Ain el-Rummaneh in April 1975 triggered the 15-year war that killed nearly 150,000 people.

Mothers, Residents of Ain el-Rummaneh, Shiyyah March Together after Unrest

They are the pride of Lebanon. Let mothers run the country and see how Lebanon will be!