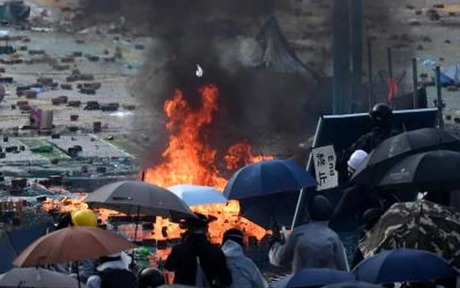 Police fired tear gas and pepper spray in Hong Kong on Sunday as tens of thousands of black-clad protesters flooded into the streets, a week after pro-democracy candidates scored a landslide local election victory.

The rally heralded an end to a rare lull and a return to the large-scale demonstrations that Hong Kongers have staged for nearly six months, fueled by growing fears that authoritarian China is stamping out the city's liberties.

It also marked a resumption of the increasingly violent confrontations between protesters and police, with officers shooting volleys of tear gas at crowds that included children.

The day's main rally in the Tsim Sha Tsui neighborhood was one of three called for Sunday, as protesters seek to keep pressure on the government after the November 24 district council elections.

"The government are still not listening to us so the protests will go on, they will not stop," said a 20-year-old student who gave only his surname, Chen.

"It is hard to predict what will happen. But the people are still very angry and want change."

The rally started peacefully, with people flooding to the waterside neighborhood by ferry and train.

"Never forget why you started," read a banner carried by protesters taking part in the march. A little girl with her hair in pigtails led chants reiterating the movement's demands for direct elections of the city legislature and leadership.

But as part of the march ran into a phalanx of police, protesters were told to move back and warned they were straying from the permitted route.

First pepper spray and then tear gas was fired at several locations, in one case catching in the crossfire an older man selling drinks and ice creams from a converted moped.

"I've sold all my drinks but it seems that I can't leave now," he told reporters, his eyes streaming.

But he quickly recovered, tucking into a red ice lolly pulled from his stocks.

"I have nothing to be ashamed of or guilty about," he said with a smile.

Hong Kong's Beijing-backed chief Carrie Lam has offered no additional concessions in the wake of the elections, and protesters said they felt compelled to return to the streets.

"The government has given no real response, it's unacceptable," 19-year-old student Edmund told AFP.

"We have to keep going. We are fighting for our freedom, not just our own freedom but the next generation too. If we give up now all will be lost."

Earlier, a smaller rally marched peacefully to the US consulate to thank American lawmakers for passing legislation backing the protest movement.

There too, demonstrators said they wanted to press their advantage after the district council vote.

"I would like to send a message to the government: we are not done and this is not over," said one 27-year-old protester, who declined to give his name.

The main rally dispersed as night fell but some protesters moved to other parts of the city, setting up the possibility of clashes later in the evening.

Months into the huge protests kicked off by opposition to a bill allowing extradition to China, demonstrators still appear to command widespread support -- with the victory of pro-democracy candidates undercutting government claims of a "silent majority" opposed to the movement.

Ahead of Sunday's rallies there were calls from organizers for people to remain "highly restrained", with fears of a return to the violence that has marked more recent months in the political crisis.

On Saturday night police fired tear gas for the first time since the election as protesters blocked roads in the Mong Kok neighborhood.

A video from the district emerged online and appeared to show a protester brutally assaulting a man as he attempted to clear a barricade.

A voice in the video mocks the man, who stumbled and slumped over after being hit across the head with a heavy metal object.

In a statement, police confirmed the incident: "So far no one has been arrested. The victim suffered a serious head injury and was sent to hospital."

"It could have killed him," Tang said.

In a Jackie Chan movie Hong Kong would have lots of "Tong" gangsters. Is that where these rioters are from? What is their strategy? Loosening police presence on their other activities?