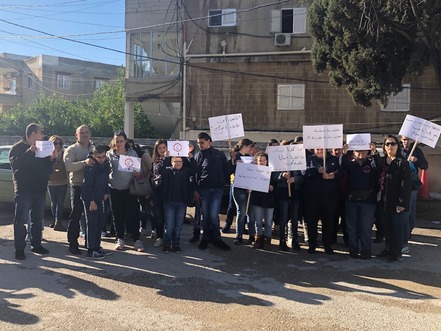 Protesters blocked several roads in the northern city of Tripoli and gathered outside state institutions as Lebanon’s uprising against the entire political class enters day 48.

Trash bins, barriers and stones were used to block the roads and prevent employees from reaching schools and offices, the National News Agency said.

NNA said that Lebanese army troops intervened immediately and embarked on opening all the roads. Only the roads leading to al-Nour Square in the city remain blocked since the uprising erupted on October 17.

Moreover, students of the Lebanese University in Tripoli’s al-Bahsas staged a sit-in outside the university's campus. They sat on the ground preventing vehicles and buses from driving into the campus, said NNA.

A number of other protesters blocked the entrance of the city's technical institute to protest against difficult living conditions and manipulations of the US dollar exchange rate.

The Lebanese army said in a statement on Tuesday that several troops were injured when protesters hurled stones at soldiers opening Naameh highway.

The army said that protesters in the town of Naameh fired bullets from a pistol the night before. It says that made the troops fire in the air to disperse the protesters.

Mounting debt sparked a social media outcry in the protest-hit country, where weeks of political and economic turmoil have raised alarm.

A man committed suicide on Sunday in the eastern border town of Arsal because he could not pay outstanding medical bills for his cancer-stricken wife.

His suicide sparked a social media outcry in the protest-hit country.

Unemployment, already above 30 per cent for young people, would also go up, it said.

But the country's deeply divided political class has yet to form a new cabinet, frustrating demonstrators who have remained mobilised.

The supporters of daesh!!!