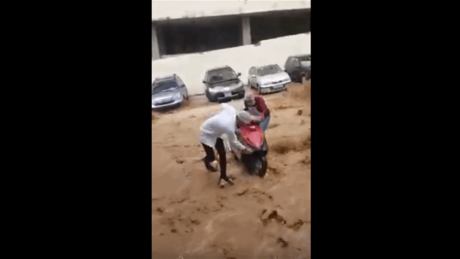 Heavy rainfall flooded many of Lebanon’s badly maintained roads, stranding citizens in their cars and adding misery and suffering to their daily life conditions amid a burgeoning economic crisis unprecedented in the country’s history.

Most of the roads have been rendered impassable by heavy rain. Several roads south of the capital mainly in Jiyeh, al-Naameh and Khaldeh all the way to the airport road were flooding with water. Cars were seen washed away.

Students on their way back home were stuck for hours in school buses. Some had to take the walk back home with assistance.

For Lebanese, the scene of flooded streets is nothing new, given poor maintenance, corruption and mismanagement. Only some of the few reasons that drove people to the streets in massive protests ongoing since October 17.

In the southern town of Nabatieh and Iqlim al-Tuffah, rainfall transformed the roads into swamps and lakes, said NNA, due to clogged sewage and waterways.

Incident response staff were nowhere to be seen.

Lebanon has been swept with anti-government nationwide protests since October 17 against mismanagement and corruption, with Lebanese demanding an overhaul of the entire political class.

A corrupt government did a cosmetic job on the roads that looked good until the first rainfall, the same happened in Dah el Bider road. Who will be held accountable for this?