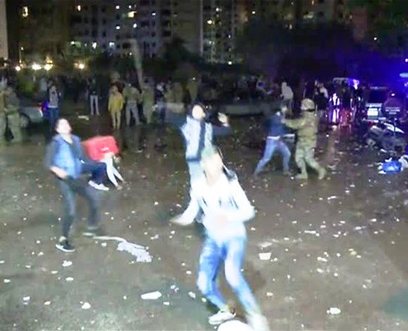 The Lebanese army said in a statement on Tuesday that six of its troops were injured while separating between “protesters and house guards of MP Faisal Karami’ in Tripoli a day earlier.

The statement said that scores of protesters gathered Monday afternoon “outside the houses of some MPs” in the northern city of Tripoli and that the situation aggravated into “provocations, stone throwing between them and guards of Karami.”

Six of the troops were injured while trying to separate between the two, said the statement.

“The units deployed to separate them and worked to disperse the demonstrators and prevent them from fabricating riots and setting fire to garbage containers, as well as arresting citizen Mohammed Abdul Aziz Ayoun Al-Soud,” it said.

In Sarba, army troops arrested four individuals after attempting to block the highway with burning tyres. They have been referred to investigation, according to the statement.

On Monday, protesters rallied outside Karami’s residence. Fierce stone-throwing clashes later erupted between the two sides, which prompted the army to fire tear gas to contain the situation.

Several people were injured by the flying rocks and objects.

The protesters had thrown trash bags outside the houses of several Tripoli politicians, such as Ashraf Rifi, Najib Miqati, Mohammed Kabbara and Samir al-Jisr.

“The protesters had thrown trash bags outside the houses of several Tripoli politicians, such as Ashraf Rifi, Najib Miqati, Mohammed Kabbara and Samir al-Jisr.”

Next time, they should create some sort of catapult to aim at their balconies and facades....

How about the house of safadi?