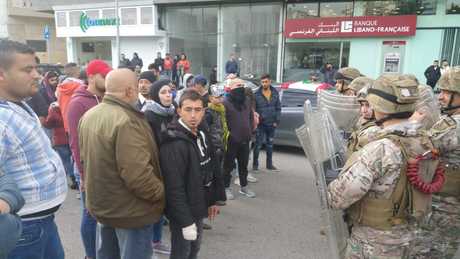 Protesters on Tuesday blocked the Jounieh highway in both directions for several hours to demand the release of four detained demonstrators.

Other protesters meanwhile rallied outside Jounieh's serail for the same purpose.

The detainees were held during a road-blocking protest in the morning.

The highway was later reopened after the release of the four protesters.

Protests meanwhile witnessed an escalation in the northern city of Tripoli, where several people were injured in clashes between army troops and stone-throwing protesters at the entrance of Tripoli's el-Mina district.

The confrontation erupted as soldiers sought to reopen a blocked road. Troops fired tear gas during the clash as protesters said rubber bullets were also fired at them.

The demonstrators in el-Mina are demanding the resignation of the municipal chief in protest at the collapse of a house overnight in the area that killed two siblings.

Protesters had attacked the municipality headquarters in el-Mina earlier in the day, smashing windows and setting a room and vehicles on fire.

A large military force was sent to the city to deal with the violence. The cause of the house's collapse wasn't immediately clear, but heavy rain appeared to have contributed. The two killed were a 19-year-old woman and her older brother.

Elsewhere, protesters blocked the al-Quntari intersection in Beirut in solidarity with the Tripoli and Jounieh demonstrators. They were later dispersed by riot police.

Other protesters meanwhile blocked the vital Jiye highway that links Beirut to the South, the Hamat tunnel in Batroun, the Chekka tunnel, the al-Beddawi highway, the Minieh-Abdeh road, the al-Bireh-Qubayat road, the Akkar Plain road and several roads in the Bekaa and Hasbaya.

The Jiye highway and the Chekka tunnel were later reopened.