U.S. Official Says 'No Aid Package' to Save Lebanon from Its 'Financial Mess' 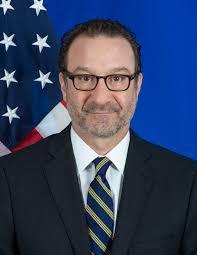 U.S. Assistant Secretary of State for Near Eastern Affairs David Schenker said Wednesday that attendees at a Paris meeting on supporting Lebanon had agreed to give technical advice to Lebanese institutions but they won't provide the bailout that caretaker Prime Minister Saad Hariri had requested.

"There's no aid package, there is no bailout," Schenker told The Associated Press. "Lebanon is not being saved from its financial mess."

Schenker said the group is considering sending some humanitarian aid to Lebanon to alleviate residents' suffering, though it was unclear when or how much.

Schenker also insisted the U.S. is not laying out conditions for which groups can be included in the new government.

If we need your opinion, we'll give it to you... Stick with your Kizballa beliefs

Lebanon after Cedar Revolution achieved 6% GNP growth and should have become the Singapore and Dubai of the Middle East, primary banking and finance center, Silicon Valley and regional headquarter of foreign corporations due to its human resources, education, democracy, plurality, entrepreneurial spirit, climate, sophistication and worldwide connections. The reason we are bankrupt, losing freedom and independence is Hizbollah and its puppets Aoun and Bassil. The economic cost of Hizbollah is in the hundreds of billions. Its hatred of West, threats to Gulf nation causing the exodus of international corporations, made long term investment impossible. Hizbollah behaving as the attack dog for Iran’s expansionist policies ready to sacrifice Lebanon at any moment as in 2006. It enslaved the Shia community in a radical culture foreign to Lebanon. Only one possible solution: Hizbollah or Federalism.

The financial and economic crisis is so severe. Anarchy is coming and the Lebanese state will falter, leading to the resurgence of militias and this time the Lebanese entity will break down into confessional states.

Mystick first of all STFU, secondly its your demonic Iranian party that caused us to the in the hole were in ya tays. Israel, America or greater Mongolia have nothing to do with the constraints in Lebanon but your two bit hair faced gorilla and his smelly party of religious zealots do! Do us all a favor including yourself and whissssht out of here to your Manar website of hate and stupidity....el Israel el? lol

Well now you know why the rest of Lebanon will not stand by your March 14 beliefs, you will sell yourself for dollars, just to fill your pockets. Weaklings libtards and liberals are the worst.

How are we selling ourselves for a dollar? The US said, they will not bail us or give any money. However, I do support people's demands, because where I live all living basics, and more are provided with dignity. Do I work hard for my money? Yes. But there's something in return for my retirement, illness and many other benefits. Let me ask you, what jobs have HA have created, provided or even produced anything besides training fighters and pay them $300-$600 to go kill themselves in other countries? All of you are obsessed with the evil Israel and US, but you don’t look among yourselves for anything. You even fight each other when you have a chance. I am not supporting Israel and what they do on all way, but look at them, they are all one hand and help each other. All we do is F each other in any way we can. So please, get some education, wake up and smell the humus.

Hezbollah and supporters. We don't want to live with you. We don't share your values and we don't leave this part of the world. Let's divorce. You go live in your Islamic Republic of Jabal Amel where you can trade with Iran, China and Russia and hate and fight with the rest of the world.
We don't want you.You have oil and gaz. Go exploit it and leave us alone. Go pray, hate and kill and steal from one another.
We will built a civil and civilized state where the rule of law will prevail.
This is coming.

Stop talking about M 14 beliefs---there is no such thing. There are m8 beliefs and everyone according to you idiots are zionists and wahhabis.

There is such thing as making a country that depends on the foundations of human dignity and beliefs. One that doesn't distinguish between religion or last name and where you can earn a living raise a family with reasonable security---one that M8 are against since apparently they thrive on sectarian politics and fear.

If you like living in fear, go to Iran and leave us alone.

Thank you US for not sending anything to the current thieves.

Fistic, I am a fan of Michigan Shia, because they are from my country and smart in a way that they possess brain cells on how to develop and learn and make legit $.

On the other hand, those uneducated farm boys chanting Shia Shia beating up peaceful demonstrators that the latter are trying to fix our cancerous institution system, would have been jailed and curbed by Mousa Sadr if he was alive.

Mastica... Stay with your hatred, blame Israel, the US, KSA for all your problems... This is what you people were taught to do...
We want freedom, independence, justice, and a country free from militias. You want nothing from that.
You attack the US, but you praise Iran. Does that make you better?

Iran needs to step up and offer the aid needed to get Lebanon back to a solid financial footing.

Good one! Iran can't help itself!

“The night is at its darkest, just before dawn and sunrise “
We hope the dark moments our people are encountering are a prerequisite to a much better life to come