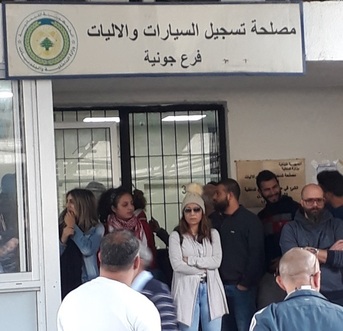 Protest movement against the political class over official mismanagement and corruption continue in Lebanon for the 57th day with protests taking different shapes from street marches, massive rallies in main squares and protests near the state’s institutions.

In the northern town of Halba, angry campaigners rallied near the town’s Serail demanding the mayor step down as they accused him of corruption and waste of public funds.

“We are ready for anything they (protesters) want but they are not entitled to make me resign. The interior ministry is,” the mayor said in remarks to LBCI reporter, while leaving his office surrounded by security forces as chants demanding his resignation resonated in the background.

In Jounieh, protesters rallied near the car registration office preventing access for employees who were in their offices before the groups arrived.

In Beirut’s area of Chevrolet, protesters rallied in front of the Cybercrime Bureau in solidarity with detained activists, Shakib Haider and Shadia Abu Dhiyab, appearing before the court against the backdrop of a lawsuit filed against them by caretaker Minister Wael Abu Faour of the Progressive Socialist Party.

Under the slogan of “give us back our stolen money,” protesters in Lebanon’s Bekaa region staged a sit-in near the National Social Security Fund in Zahle.

Lebanon has been rocked by unprecedented popular protests over official mismanagement and corruption since October 17.

On Wednesday, the International Support Group for Lebanon, led by France and the United Nations, met to discuss conditions for helping ease turmoil in Lebanon, which is facing its worst financial crisis in decades and political uncertainty amid an ongoing protest movement.

But Lebanon's appeal for urgent aid received short shrift making assistance conditional on the formation of a new reform-minded government.

Prime Minister Saad Hariri stepped down two weeks into the revolt, but a deeply divided political class has failed to reach agreement on a new head of government. Hariri remains caretaker premier.