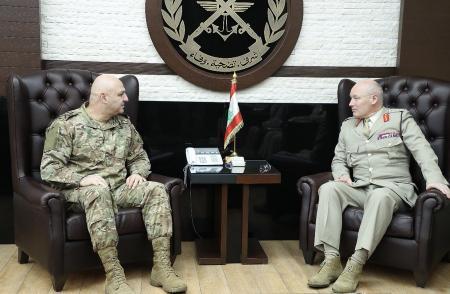 “Sir John discussed the current situation in Lebanon, the urgent efforts to form a government that reflects people’s aspiration, and the role of the Lebanese Army and Security Forces in protecting protesters and maintaining law and order,” the statement said.

At the end of his visit, Sir John said: “I am visiting Lebanon at a critical time in its history. The country faces many urgent challenges and the UK continues to offer its support; in October we announced additional funding of $25 million for the Lebanese Army (2019-2022), part of our ongoing support to the Lebanese Army, the sole legitimate defender of Lebanon.”

He added: “They are entrusted with keeping Lebanon safe -- including securing the borders, preventing terrorism and protecting the right to peaceful protests – and I commend them on their professional performance. It is vital that the Lebanese security agencies continue to protect the right to peaceful protest, and those who seek to suppress the protest movement through violence and intimidation should understand that this is completely unacceptable.”

British Ambassador Chris Rampling for his part said: “A good visit for Lieutenant General Sir John Lorimer, the UK's Defense Senior Adviser on the Middle East. The International Support Group meeting in Paris yesterday was a demonstration that the ISG is here to support a Lebanon that is committed to reform. Lebanon needs a government urgently.”

“We have been clear that the matter of choosing leaders and a Cabinet is a domestic issue for the Lebanese. The people of Lebanon have been clear in their demand for improved governance, and they should be heard,” he added.