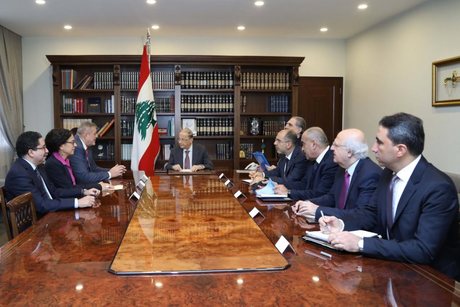 On Wednesday, Lebanon's appeal for urgent aid received short shrift at the Paris conference, with France, the US, Russia and other countries making assistance conditional on the formation of a new reform-minded government.

Speaking at the end of the ISG meeting for Lebanon, host French Foreign Minister Jean-Yves Le Drian said: "The only possible criteria (for aid) is the effectiveness of the government in implementing the reforms awaited by the population.

"This is the only way that the participants around this table and beyond can mobilise to give Lebanon the support it needs."

Lebanon has been rocked by unprecedented popular protests over official mismanagement and corruption since October 17.

Hariri, who remains premier in the interim, had appealed for aid from Lebanon's allies to secure basic imports in the face of an acute dollar liquidity crisis.

Importers of fuel, medicines and wheat have warned of shortages if the situation persists.

But the international community has insisted that any aid be conditional on the implementation of wide-ranging reforms, from greater transparency to guarantees on the independence of the judiciary.

Prime Minister Saad Hariri stepped down two weeks into the revolt, but a deeply divided political class has failed to reach agreement on a new head of government.