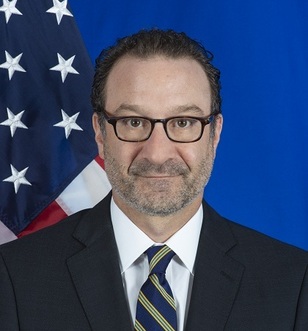 A U.S. diplomat stressed on Saturday that any party getting involved with financing Hizbullah will be subject to sanctions.

“When we discover that a person or organization supports terrorism, we start collecting security and financial information about them in a file based on intelligence reports, legal arguments, and others. We announce the inclusion of these individuals and institutions on the sanctions list after coordination with other government agencies,” said U.S. Assistant Secretary of State for Near Eastern Affairs, David Shencker in remarks he made to An-Nahar daily.

“The Treasury decision is consistent with our position that Hizbullah is a terrorist, criminal, and corrupt organization. Its activities not only depend on the Shiite community, but also on other individuals and groups who facilitate its activities, they belong to other sects. When we impose sanctions on any person or entity, we do not take the religious background into account,” he added.

Someone is preparing a nasty surprise for the FPM.
The day Bassoula wakes up to see that his hidden accounts were all frozen and that he can't withdraw but 1 million LBP a week like everybody else, will be a day of reckoning.

The United States should sanction blablablablablablabla the shia christian of european parents for luring unsuspecting virile young men to penetrate his deep and wide luv tunnel for the purpose of financial gain and in support of shiism and terrorism.