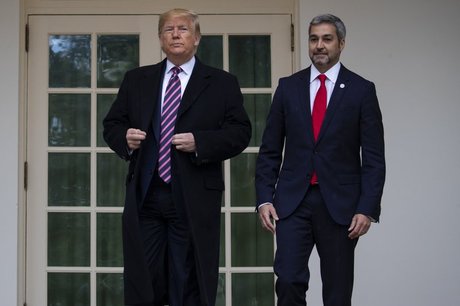 It was the briefest of moments in the Washington media spotlight for Paraguay's President Mario Abdo Benítez.

Sitting alongside U.S. President Donald Trump, the South American leader spoke about a dozen words to gathered journalists Friday and then watched in silence as Trump fielded questions about the articles of impeachment that had just been sent to the House of Representatives.

The two leaders then headed into private talks to focus largely on the fight against corruption and organized crime.

"We are doing a lot of work with Paraguay on terrorism, drugs, trade. A lot of different things," Trump said.

Abdo replied in English that his visit to the White House was a "great honor" for his country.

The White House announced after the meeting that the United States will offer two Special Forces training events in Paraguay in 2020 and 2021. It also said the U.S. Southern Command will condut a regional crisis response exercise in Paraguay in 2021.

The Trump administration counts Abdo among its allies in the region. In August, it complimented Paraguay for designating Hezbollah, al-Qa'ida, The Islamic State group and Hamas as terrorist organizations.

U.S. officials have long been concerned about smuggling and suspected terrorist money laundering in the Tri-Border Area shared between Paraguay, Brazil and Argentina.

Earlier this week, the FBI and Justice Department created a team to work with authorities in Paraguay, a nation of about 7 million people.

After the meeting, Abdo posted a video on Twitter in which he said he suggested a free-trade agreement between the United States and South America's Mercosur trade bloc. A similar deal recently signed with the European Union remains unratified.

The White House said the United States looks forward to opening market access for Paraguayan beef and beef products once food safety and animal health can be fully assured.

Abdo's father served as private secretary over 25 years for military strongman Gen. Alfredo Stroessner, who ruled Paraguay with an iron fist from 1954 to 1989. Abdo got a degree in marketing in the United States.

Their meeting came days after the Department of State imposed sanctions earlier this week on two former Paraguayan officials due to their alleged involvement in significant corruption: ex-Sen. Oscar González Daher, a former president of Paraguay's judicial disciplinary board, and former Attorney General Javier Díaz Verón.