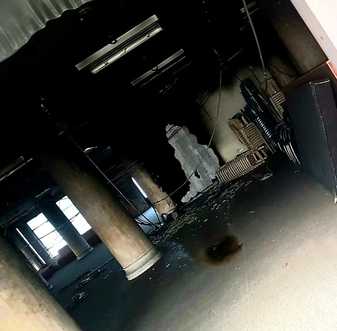 NNA said the FPM’s office in the Akkar town of al-Joumeh was attacked around 3:00 am.

“The unknown assailants smashed the outer glass door and torched the office before fleeing to an unknown destination,” the agency said.

Mustaqbal’s office in the Akkar town of Khreibet al-Jendi was meanwhile vandalized in the same manner.

NNA said security forces inspected the two offices and launched a probe to identify the culprits.

Al-Mustaqbal Movement meanwhile issued a statement strongly condemning the attack on its office in Khreibet al-Jendi, saying the concurrence of the incident with the attack on the FPM office raises suspicion that “unknown sides are trying to exploit contradictions and stir strife among the sons of the same region.”

The assaults came just hours after the capital Beirut was rocked by the most violent government crackdown on protesters since nationwide demonstrations began two months ago.

So not sad. LoL

I love how you come out and condemn something like this, yet every time your amal and hizballah attack physically assault protestors while screaming "shia shia" you're nowhere to be seen. Pathetic Iranian puppet.

I am against the violence on both sides, but it is funny how you think that the protesters are beautiful angels they too are violent and they vandalize the streets, whilst they say secterian slurs against shia people just because they support Iran, then those youngsters gets enough and yell Shia shia because they are not ashamed to call themselves shia.

Christians are under the cover of France and America, sunnis are under Saudi Arabia. So what is the Shia is under Iran? You are the hypocrits here.