Amnesty Decries 'Excessive Use of Force' against Protesters in Beirut 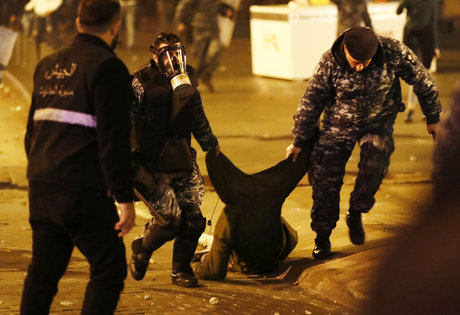 Amnesty International's Diala Haidar on Sunday decried the "excessive use of force" in response to "overwhelmingly peaceful protest."

"The intention was clearly to prevent protesters gathering," she said of Saturday night’s crackdown, denouncing the presence of masked men in civilian clothes joining security forces in "violently attacking protesters."

Caretaker Interior Minister Raya al-Hassan has ordered the country's security forces to open a "rapid and transparent" inquiry into the clashes, which left dozens of people injured.

Security forces in the capital used tear gas and rubber bullets to disperse demonstrators, who had gathered Saturday evening to demand an independent technocrat government ahead of talks due to begin Monday to appoint a new premier.

Hassan demanded the identification of those responsible for the most violent episode since the largely peaceful anti-government protests began on October 17.

She warned against "infiltrators" seeking to use protests to provoke "confrontations."

Saturday's clashes erupted at the entrance to the street leading to parliament, as security forces beat protesters who tried to breach metal police barricades.

Lebanese civil defense took 36 injured to hospital and treated 54 people at the scene, the organization said on Twitter.

The Lebanese Red Cross transported 15 injured to hospital and treated 37 people on site, an official with the organization told AFP.

Both protesters and security forces were injured, the organization said, with some affected by tear gas and others struck by hurled stones.

Lebanese security forces said on Twitter about 20 from its ranks were hospitalized, while others were injured and treated on the spot.

The clashes lasted several hours until the first hours of Sunday.

The military assistance Lebanon gets from the US is being used against the unarmed peaceful demonstrators asking for their rights.

Mr President Trump, you must pressure them to put an end to the oppressing.

Get relevant or stfu! The only people causing vandalism and chaos are your thugs screaming their heads off : "shia shia".