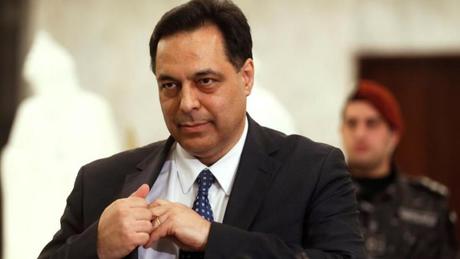 Diab, a university professor and former education minister, will have to steer Lebanon out of its worst economic and financial crisis in decades. He's also taking office against the backdrop of ongoing nationwide protests against the country's ruling elite.

Berri did not make any statement to reporters after the meeting.

Later a statement was released by Berri's media office, he said the “new government is an opportunity for reunion” and should “represent all political parties starting with the protest movement, al-Mustaqbal Movement (of resigned PM Saad Hariri), the Lebanese Forces and the Progressive Socialist Party (PSP).”

The PSP's Democratic Gathering bloc of ex-MP Walid Jumblat officially announced non-participation in the consultations and the new government.

After holding talks with Diab, Hariri did not comment on the government formation, but urged his supporters to “express their opinion peacefully without assaulting the Lebanese army and security forces," after Friday's clashes between the two in Corniche al-Mazraa.

“When PM Rafik Hariri was assassinated, we did not hurl stones at anyone. You can express your opinion peacefully and the Lebanese army is our army.”

After meeting Diab, Hariri and Berri held talks on the sidelines of the consultations.

Former PM Tammam Salam said after meeting the PM-designate: “We are in the midst of an uncomfortable situation in the country, especially that a large group does not agree with what is happening. What we witnessed yesterday in the streets is not permissible.”

On Friday, scuffles broke out in Beirut and other areas between supporters of Hariri, and Lebanese troops and riot policemen. The ex-premier's supporters were protesting Diab's nomination. The scuffles left at least seven soldiers injured.

“We look forward to forming an effective government of experts,” said Deputy Speaker Elie Ferzli, adding “we called for a small government, implementation of reforms and fighting corruption.”

Al-Mustaqbal Movement bloc told Diab that it will not take part in the new government, and urged the PM-designate for a “swift government formation.”

Development and Liberation bloc met Diab and called for an “emergency cabinet representing all parties and the popular movement ​in order to rescue the country from the current crisis.”

Hizbullah’s Loyalty to the Resistance bloc voiced calls for “serious dialogue in order to rescue the country,” said MP Mohammed Raad. “No one wants a government of confrontations. Rather, it must present the correct approach to energize the financial and economic situation.”

The Kataeb bloc said: "Staging early parliamentary elections is the only solution for the crisis paving way for the people to choose their representatives."

Lebanese banks have imposed unprecedented capital controls over the past weeks. Thousands have lost their jobs, while the economy is expected to contract in 2020.

The new prime minister won a majority of lawmakers' votes after receiving backing from Hizbullah and its allies, which have a majority of seats in parliament.

However, he lacks the support of major Sunni figures, including the largest Sunni party headed by Hariri.

That's particularly problematic for Diab, who, as a Sunni, doesn't have the backing of his own community. And under Lebanon's sectarian power-sharing agreement, the prime minister must be Sunni.

Hizbullah had backed Hariri for prime minister from the start, but the group differed with him over the shape of the new government.

Lebanon's sustained, leaderless protests erupted in mid-October, and forced Hariri's resignation within days. But politicians were later unable to agree on a new prime minister. The ongoing protests and paralysis have worsened the economic crisis.

new government is an opportunity for reunion” and should “represent all political parties starting with the protest movement, al-Mustaqbal Movement (of resigned PM Saad Hariri), the Lebanese Forces and the Progressive Socialist Party (PSP).”

What a genius---aren't the political parties the ones who created this mess? What diplomatic BS.

What a load of BS! America did not create this crisis. It is your hezbollah, the terrorist militia, that sponsors corruption. What further destroyed the country and its economy is your hezbollah insisting on national unity governments since 2008. Go educate yourself!

No more masks, Lebanon under armed occupation by Hizbollah, a criminal organization that assassinated our best hopes and sucked Lebanon's blood until bankruptcy, isolation and oppression. Aoun and company were the useful idiots used in 2006 to kill the Cedar Revolution. Diab is a greater useful idiot to be used to give cover to this occupation, keep Lebanon to the abyss, and turned the army into Basij. Never has been greater selfishness and treason in plain daylight. Demonstrators should be very careful at this trap, All free Lebanese should insure not a cent of foreign aid comes to Hizbollah's government.

The Cedar Revolution principles are: Sovereignty, Independence, Freedom, Justice, and Democracy. No doubt u don't agree with them.

Go resist and liberate shebaa farms instead of destroying Lebanon and trying to liberate every Arab capital.

Lebanese force vote was a major tactical mistake similar to Batrak Sfeir decision not to force president LaHood to resign. The consequences are serious in weakening the confronting forces to the power of arms. The road from here is as Assad used time to weakened the demonstrators and paints them as radicals; and then the Iranian solutions to used the security forces to brutally suppress any demonstration and silence by force any opposition. The only positive impact is making it clear that without sovereignty we will continue bleeding and nothing positive is possible.

The road from here is clear. The path is more defined. No more blocking roads or any confrontation with army. Instead, massive weekend demonstrations throughout the country. In politics, zero participation with Hizbollah government so it will be obvious to the world for what it is. Insuring all the world understand their game. Let them be responsible for the economic woes to come and let them confront people anger. Meanwhile, time to prepare for next election consistent with demonstrators demand and restoring sovereignty.