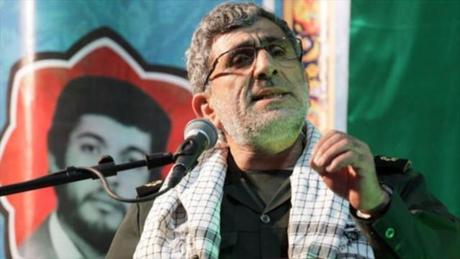 Iran's supreme leader appointed Esmail Qaani as the new head of the Revolutionary Guards' foreign operations arm after its commander was killed Friday in a US strike on Baghdad airport.

"Following the martyrdom of the glorious general haj Qasem Soleimani, I name Brigadier General Esmail Qaani as the commander of the Quds Force of the Islamic Revolutionary Guard Corps," Ayatollah Ali Khamenei said in a statement posted on his official website.

Quds Force? What Quds Force? Their only job is to kill Arabs and overthrow Arab regimes. When was the last time the Quds Tuz Force engaged Israel?

Where do they find these characters?

Revolutionary Guards' foreign operations arm. The name says it all

Create more chaos in Arab countries instead of showing muscles to fight the Jewish state? Why have you not sent a single one scud missle from Iran to Israel?

Because they will do it at the right time and at their own chosing. Meaning never. Moughniyeh and his son and many others killed and what have they done in retaliation? Nothing! Mitwalis and yshoodis are اولاد العم

He better rush for an intensive course of "Hiding" from Hassan Nasrallah.