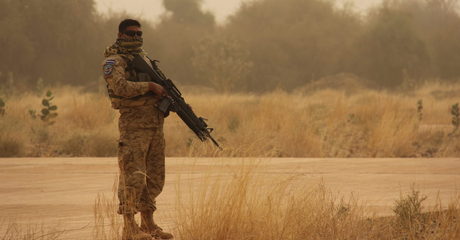 Eighteen UN troops and two civilians were wounded Thursday in a mortar attack on a military base in northern Mali, a UN official said, in fresh violence in the war-torn West African country.

Olivier Salgado, the spokesperson for the UN mission in Mali, said the toll was "preliminary."

Mali has been struggling to contain an Islamist insurgency that erupted in the north in 2012, and which has claimed thousands of military and civilian lives since.

An internal UN report seen by AFP said 15 mortar rounds landed "inside and around" the military base in Tessalit, in northern Mali close to the border with Algeria.

Camp personnel took shelter in a bunker, the report said, adding that two Malian civilians were wounded in the section of camp harbouring French soldiers.

Some 4,500 French troops are deployed in the Sahel region, while the UN has a 13,000-strong peacekeeping force in Mali.

The Tessalit camp hosts a battalion of troops from Chad, as well French troops.