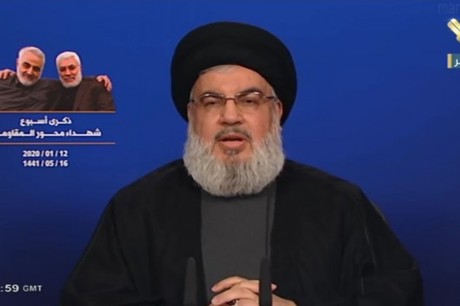 Hizbullah chief Sayyed Hassan Nasrallah on Sunday warned U.S. officials that they would be mistaken if they thought that “the world has become safer” with the death of top Iranian general Qasem Soleimani.

“The U.S. administration will pay a hefty price and this crime will not go unpunished and it will not be forgotten,” said Nasrallah in a televised speech commemorating Soleimani and Abu Mahdi al-Muhandis, an Iraqi paramilitary leader who was killed with Soleimani in a U.S. drone strike in Baghdad.

“They are saying that the world has become safer post Soleimani and we tell them that they will realize that they are mistaken through blood. The world after Soleimani’s martyrdom will be different and it will not have a place for tyrants,” Nasrallah added.

“During the upcoming days, weeks and months, the Americans must pull out their troops, officers and ships and they must leave the region. There is no choice other than departing horizontally (in coffins) after they arrived vertically,” Nasrallah warned, noting that the U.S. withdrawal from the region is “a matter of time.”

Commenting on the Iranian missile strike on a U.S. base in Iraq, Nasrallah said the response to Soleimani’s killing is “not a single operation but rather a long course that leads to the ouster of American forces from the region.”

“Who dares on this planet to stand in the face of America and strike one of its bases with missiles?” Nasrallah asked.

“All U.S. bases in the region can be targeted by Iranian missiles and Iran possesses more accurate missiles,” he warned.

Nasrallah also noted that “this was also a strong message to the Zionist entity (Israel), seeing as (Israeli PM Benjamin) Netanyahu used to dream of sending his warplanes to Tehran.”

“The Americans have been reined in… and the American prestige has been broken,” Nasrallah boasted.

Moreover, Nasrallah suggested that Iraq will be the arena that will witness future retaliatory attacks against the Americans.

“The second arena that is concerned with retaliation is the Iraqi arena in which America committed its crime and because it targeted an Iraqi leader,” Nasrallah said, adding that “should Americans refrain from leaving Iraq, the Iraqi people and resistance factions are the ones who would decide how to deal with the occupation forces.”

He overloaded us with Iran this and Iran that..... Why doesn't this pos go live in Iran along with blablablablabla, mystic, southern and mowaten?!

The day this evil sectarian iranian terrorist is brutally and violently murdered is the day we celebrate our true independence!

Nasrallah: Some American analysts said that the funeral in Tehran had scared Trump.

Nasrallah: Soleimani had the biggest and greatest funeral in history after that of Imam Khomeini.

Inshallah you will have an even bigger funeral.

Well the two he is talking about are resting in pieces

Anything said by him is pure bs and morale boosting at this point. I wonder if he talks about the 'divine victories' of downing the Ukrainian plan and hitting the emptied bases in Iraq.

Here is what al-Muhandis said a few days before his ugly death:

That is their real objective! All this talk about destroying and wiping Israel off the face of the earth is mere populist propaganda. Their real objective is to overthrow Sunni Arab regimes and spread their ideology of sectarianism, hatred and chaos.

Strange, really strange! When America invaded Iraq, overthrew Saddam, and handed over Iraq to the Shia of Iran, you and your likes were dancing in the streets. In fact, your now dead Soleimani was fighting along side the Americans and was pictured among them.

Just listen to this retard and laugh!

What strikes me first is that people like Nasralrat never talk about themselves and positive achievements such as bringing water and power to villages, providing accommodation and healthcare to refugees....

They’re parasites, that’s it. They leech on the system and do nothing but destructive things.

This is not what the Lebanese want. Lebanon united to build a new prosperous country, no want asked to be drug into a war. Unbelievable!

He worries about iran so much why does he stay in Lebanon? Oh I forgot to protect isreal...

The most rediculous speech I have ever heard from Nassy. Wow, they made huge damage to US military equipment! And their prestige has been tarnished, LOL. Yes, and the earth is flat...

The guy’s lost it. Stinks desperation.

Nasrallah lease of the rats hole has been Renewed for ever. You idiot want to threaten America and that your masters in Iran are afraid to do so.
You had the Mossad looking for you in the past, and now you want the CIA to find you and push the button from sky to send you to soleimani land?

Nasrallah to U.S. officials: The world has not become safer after Soleimani's killing.

haha so true!
His cancer is eating him, we'll get there.

Nassralah and the criminal Hizballah are Lebanon enemy number one and the primary cause of our misery and isolation. He should be put in Jail and Hizbollah, after disarmed, thoroughly investigated for all its crimes, assassinations, drug trade, money laundering, illegal crossings, illegal communication network, influence peddling, thieves protection, and tax evasion.

Your end is going to be worse than soleimani...continue bikiring and dividing the country towards arms and war meanwhile the people and country is collapsing while your eyes are stuck to soleimani rear.

There is a rumor that Iran had allow US to kill Soleimani, due to his increasing arrogance and power in ME. Maybe therefore Iran made such "devastating" rocket attack, demolishing 3 barracks and 1 toilette in US bases.